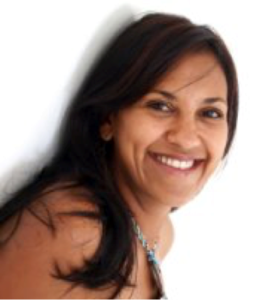 Commentary from Dr. Blanche Cupido (Cape Town, South Africa), section editor of ACHD Journal Watch:  Recent studies implicated the role of lymphatic congestion in the pathogenesis of both protein-losing enteropathy and plastic bronchitis in patients with the Fontan circulation resulting in late Fontan failure. The role of lymphatic drainage in the development of early Fontan complications is not well described. This is a single center retrospective study at a tertiary paediatric center in the US, describing the prevalence and cause of early post-Fontan morbidity.

All patients who underwent a Fontan operation from June 2012 to July 2017 were included. Those presenting for a Fontan take-down, those for Fontan revision or those with a Kawashima operation, were excluded. Lymphatic patterns were characterized using T2-weighted images. Patterns included 4 types: 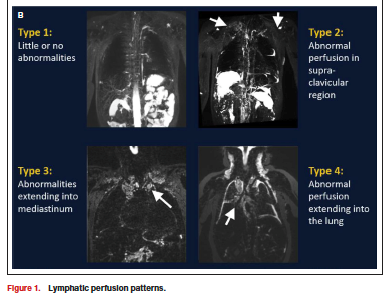 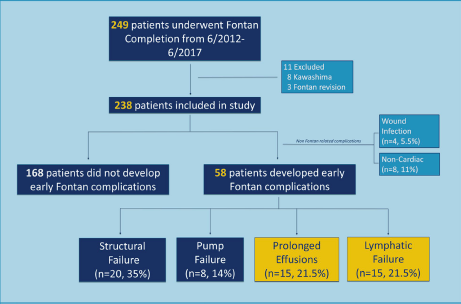 Two hundred and thirty-eight patients were included in the study; 58 developed early Fontan complications (25.7%) – only 2 deaths occurred. Mean age at surgery was 3.4±1.7 years. An extra-cardiac fenestrated Fontan was present in 81% of the cohort.

The presence of a systemic RV (81% vs 67%, p0.047), a longer bypass time (median time 69.5 vs 64 minutes, p=0.025) and a longer cross-clamp time (median time 29 vs 25 min, p=0.002) was associated with a higher rate of early post-Fontan complications.  The presence and severity of atrio-ventricular valve regurgitation did not have an effect on early outcomes.

One hundred and ninety-five patients (82%) had pre-Fontan MRI’s. The systemic-pulmonary arterial collateral (APC) burden was quantified and expressed as a percentage of the total aortic flow. Of the 51 patients with a >35%  APC burden, 43 had collateral embolization prior to Fontan completion. Only 126 patients had the correct T2 weighted sequences to establish lymphatic flow patterns: 39 had type 1, 41 had type 2, 35 had type 3. Only 7 had type 4 – thus rather rare.