Surgical repair of Tetralogy of Fallot (ToF) is usually performed in the first months of life with low early postoperative mortality. During long-term follow-up, however, both right (RV) and left ventricular (LV) performances may deteriorate. Tissue Doppler imaging (TDI) and speckle tracking echocardiography (ST) can unmask a diminished RV and LV performance. The objective of the current study was to assess the cardiac performance before and shortly after corrective surgery in ToF patients using conventional, TDI and ST echocardiographic techniques. Thirty-six ToF patients after surgery were included. Transthoracic echocardiography including TDI and ST techniques was performed preoperatively and at hospital discharge after surgery (10 days to 4 weeks after surgery). Median age at surgery was 7.5 months [5.5-10.9]. Regarding the LV systolic function there was a significant decrease in interventricular septum (IVS) S’ at discharge as compared to preoperatively (pre IVS S’ = 5.4 ± 1.4; post IVS S’ = 3.9 ± 1.2; p < 0.001) and in global longitudinal peak strain (GLS) (pre = – 18.3 ± 3.4; post = – 14.2 ± 4.1; p = 0.003); but not in the fractional shortening (FS). Both conventional and TDI parameters showed a decrease in diastolic function at discharge. Tricuspid Annular Plane Systolic Excursion and RV S’ were significantly lower before discharge. When assessing the RV diastolic performance, only the TDI demonstrated a RV impairment. There was a negative correlation between age at surgery and postoperative LV GLS (R = – 0.41, p = 0.031). There seems to be an impairment in left and right ventricle performance at discharge after ToF corrective surgery compared to preoperatively. This is better determined with TDI and ST strain imaging than with conventional echocardiography. 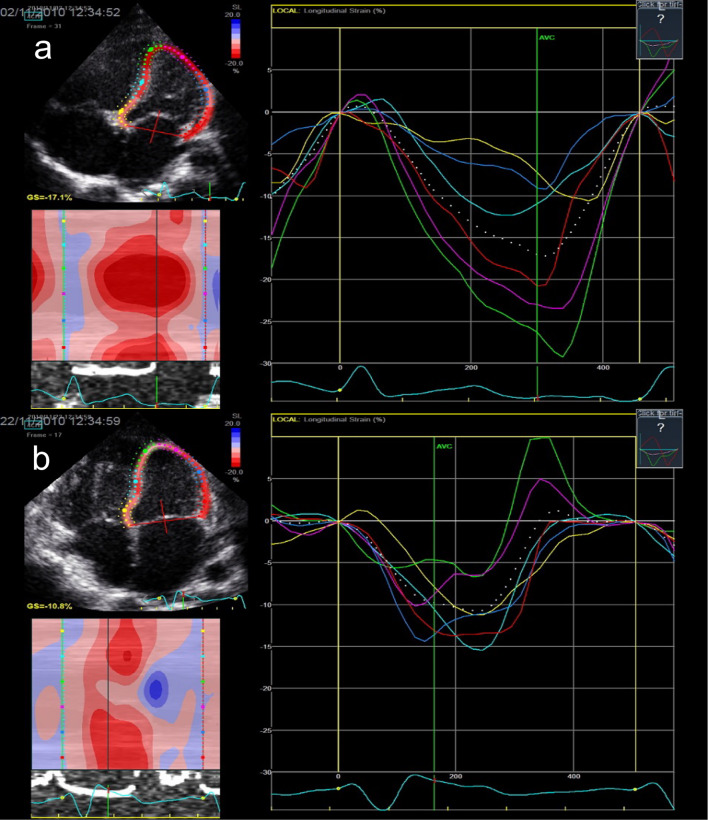