Commentary from Dr. Timothy Pirolli (Dallas), section editor of Congenital Heart Surgery Journal Watch:  Coarctation of the aorta is a relatively common congenital anomaly that, in isolation, can often be repaired with extended end-to-end repair via left thoracotomy and without the need for cardiopulmonary bypass. However, residual coarctation can lead to need for re-intervention and possibly hypertension. The extended end-to-end repair has become the standard surgical preference at the majority of centers, but questions about long-term results remain. Also, there remains controversy over the size cutoff points for when a coarctation can be best managed with an extended end-to-end repair vs. a more invasive arch repair on cardiopulmonary bypass via sternotomy.  The authors of this study sought to evaluate the long-term results of their coarctation repair experience.

The study reviewed patients with isolated coarctation or coarctation with a VSD who underwent surgery between 2000 and 2015. Patients with more complex congenital cardiac malformations were excluded from the study. A total of 251 patients were identified. Of those 186 patients were identified with follow-up (mean 6.1 ± 4.2 years). Table 1 details the preoperative characteristics of the cohort. The primary goals were to evaluate mortality, re-intervention rates and incidence of hypertension. The authors also sought to evaluate the cut-off Z scores for the proximal and descending arch for repair via left thoracotomy.

The surgical technique of repair via left thoracotomy was standard for the institution and was performed in 91% of the 186 patients.  The remaining 9% underwent arch repair via sternotomy. Intraoperative details are listed in Table 2. Interestingly 11% of the coarctation repairs via left thoracotomy were performed with partial cardiopulmonary bypass in this series. The authors describe the “older patients deemed to have collateral circulation (femoral arterial pressure lower than 45 mmHg during test-clamping of the transverse aortic arch)” as needing partial CPB, but it would’ve been helpful to know the ages and weights of these patients to help understand which patients fit in this category.

There were 3 deaths in the follow-up period. Two were non-cardiac in origin and one was a fatal myocardial infarction in a syndromic patient 6 months after repair. The Kaplan-Meier curve for re-intervention is found in Figure 1.  A total of 18 patients had a gradient between upper and lower extremities of > 20 mmHg, but only 4 of them required late re-intervention for recurrent coarctation. All four had transverse aortic arch hypoplasia (Z score < 2) at the time of initial repair. The follow-up for hypertension was the weakest point in the conclusions as it was based on only 18% of the patients in the cohort. So, seemingly, no meaningful conclusions can be made about presence of hypertension long-term.

The authors also evaluated the predictors of surgical approach (sternotomy vs. thoracotomy). Not surprisingly, the presence of a VSD favored sternotomy. Transverse aortic arch hypoplasia did not necessitate repair by sternotomy, however mean proximal arch measurements were smaller in the sternotomy group than in the thoracotomy group (0.35 ± 0.6 cm vs. 0.64 ± 0.3 cm). When the z-scores of proximal transverse arch were examined, the results showed a z-score of -4.98 ± 0.82 for sternotomy group and -2.69 ± 1.84 for the thoracotomy group. The authors performed a logistic regression model for continuous variables to determine cut-points for deciding upon sternotomy vs. thoracotomy. This is illustrated in table 5 and the proximal transverse arch z-score cut-point was -4.1 and for the distal transverse arch it was -2.8. This may be the single-most important findings from this study and compares similarly for cut-off points from other studies. This could help guide surgeons on how small is “too small” for a coarctation repair via thoracotomy.

The limitations of the study were discussed by the authors and included the short “long-term” follow-up period, the incompleteness of follow-up in the cohort, variability of echo findings and the nonrandomized, retrospective nature of the study at a single center. As extended end-to-end repair has become the standard at most institutions, a prospective study of repair via thoracotomy vs. sternotomy is likely impossible. This report adds further evidence that extended end-to-end repair of coarctation is an excellent technique with excellent long term outcomes. The finding of such a low Z-score as a cut-off for the proximal transverse arch should reassure surgeons that performing a repair via thoracotomy is not only feasible, but also has good long term outcomes. 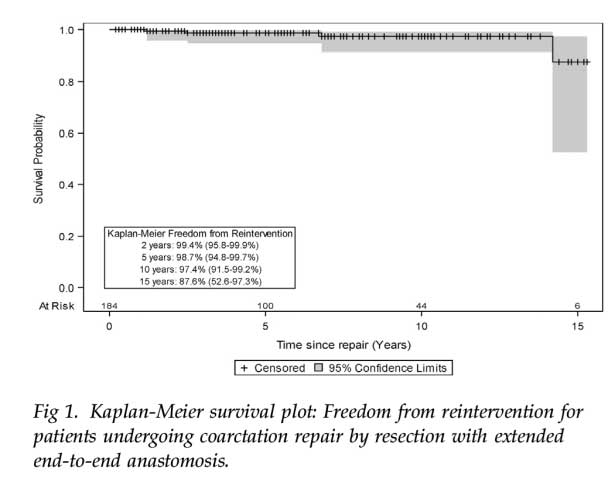 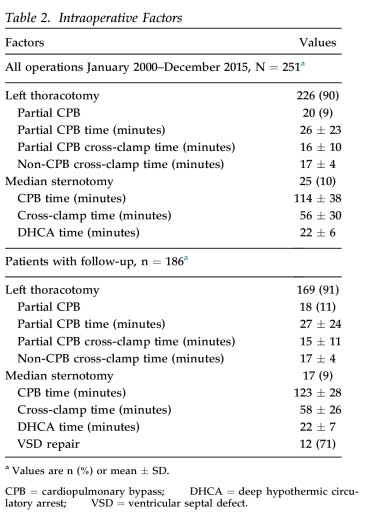