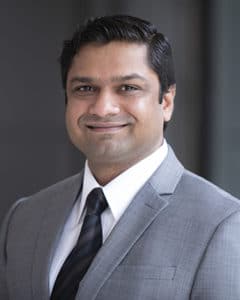 Study details
A prospective study in 886 consecutive pediatric athletes aged≤16 years undergoing PPS.
Furthermore, the authors tested the diagnostic accuracy of the 2010 European Society of Cardiology recommendation (2010-ESC), the 2013 Seattle-criteria-(2013-Seattle) and the 2017-International-ECG-recommendation (2017-International) in identifying pathologies at risk of SCD in this cohort of athletes.

According to the 2017-international the most common normal ECG pattern in pediatric athletes were isolated left ventricular hypertrophy criteria (LVH)(26.9%), juvenile T-wave pattern(22%) and ERP(13.2%). Among borderline abnormalities the most frequent were left axis deviation (1.8%) and right axis deviation (0.9%) while T wave inversion (TWI) (0.8%) especially located in inferior leads (0.7%) was the most prevalent abnormal ECG changes. 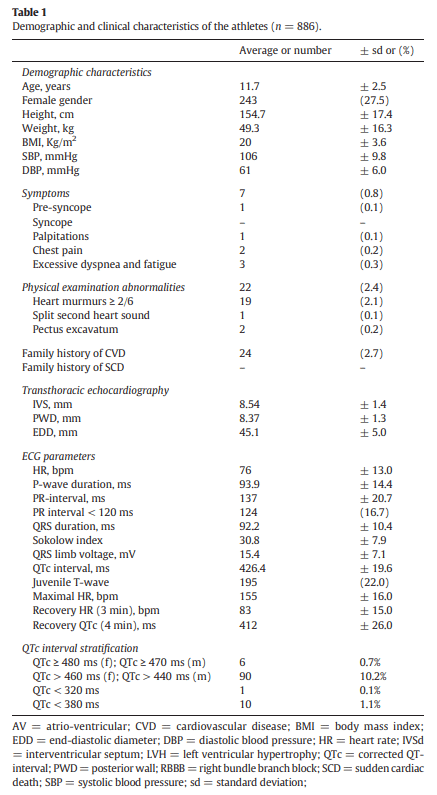 Results
Seven athletes (0.79%) were diagnosed with a condition potentially related to SCD: three of them were diagnosed with Wolf-Parkinson-White syndrome (WPW), one with type-1 long-QT syndrome (LQTS-1), two with Ebstein’s anomaly and one with Botallo’s duct (PDA) and LV dilation. The two reported cases of Ebstein’s anomaly were both asymptomatic with moderate tricuspid regurgitation one of them presented also frequent supraventricular arrhythmias on 24-h Ecg Holter. Among these athletes, nobody demonstrated abnormal findings on physical examination while six athletes (0.85%) showed an abnormal ECG according to both 2010-ESC and Seattle criteria whereas four (0.68%) according to the 2017-International (Table 2). 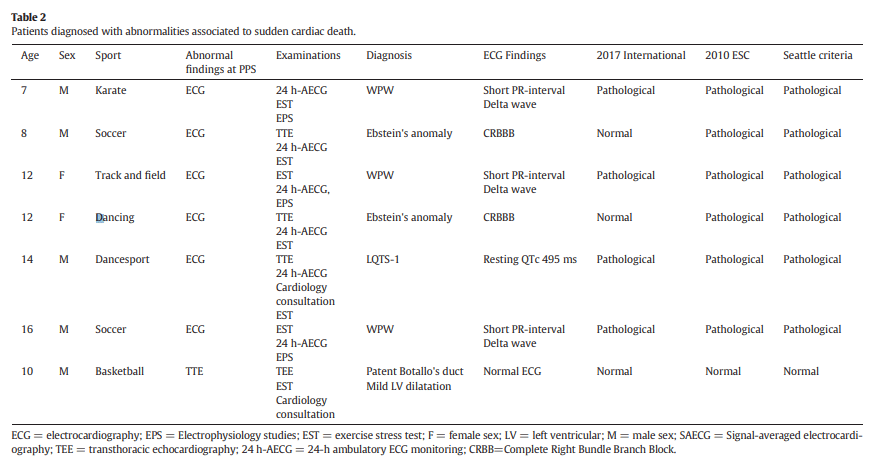 Comparison of diagnostic performance of the three ECG interpretation criteria

Discussion
ECG abnormalities representing training-related ECG adaptation; the false positive rate was significantly reduced to 2.2% when using the 2017-International compared with 5.1% of the 2013-Seattle and 36% of the 2010-ESC respectively; the 2017-International showed the lower sensitivity failing to identify two athletes with Ebstein anomaly and CRBBB on ECG. This higher specificity was largely attributable to re-classification of left and right axis deviation, left and right atrial enlargement as normal ECG pattern not requiring further investigations when observed in isolation or in association with a recognized training-related ECG finding.

Conclusion and Implications for pre-participation screening
The ECG can provide valuable information when interpreted properly, accounting for the electrical and structural changes that are common results of regular training. The European Society of Cardiology and the Association of European Pediatric Cardiology recommend initiation of ECG based screening to coincide with the onset of competitive athletic activity that is under 12 years for the majority of sports. We confirmed that the QTc-interval in pediatric athletes seems to be longer than in the general pediatric population [20]. Stratification of QTc interval showed that increasing the cut-off for long-QTc from>440 to ≥470 ms and from >460 to ≥480 ms in male and female respectively, as suggested by the 2013-Seattle criteria and the 2017-International, considerably reduce the prevalence of long-QT in the pediatric group from 10.2% to 0.7%, thus supporting the use of a higher cut-off in the pediatric athletes as suggested in adult athletes

As suggested by our study among the currently available recommendations for the ECG interpretation the Seattle criteria demonstrated the best balance between improvement in specificity and loss of sensitivity. In this context, the classification of isolated CRBBB as a normal finding in pediatric asymptomatic athletes could lead to not diagnose diseases at risk of SCD. Therefore, there is need for the development of specific and sensible diagnostic ECG criteria for PPS in pediatric athletes aged ≤16. 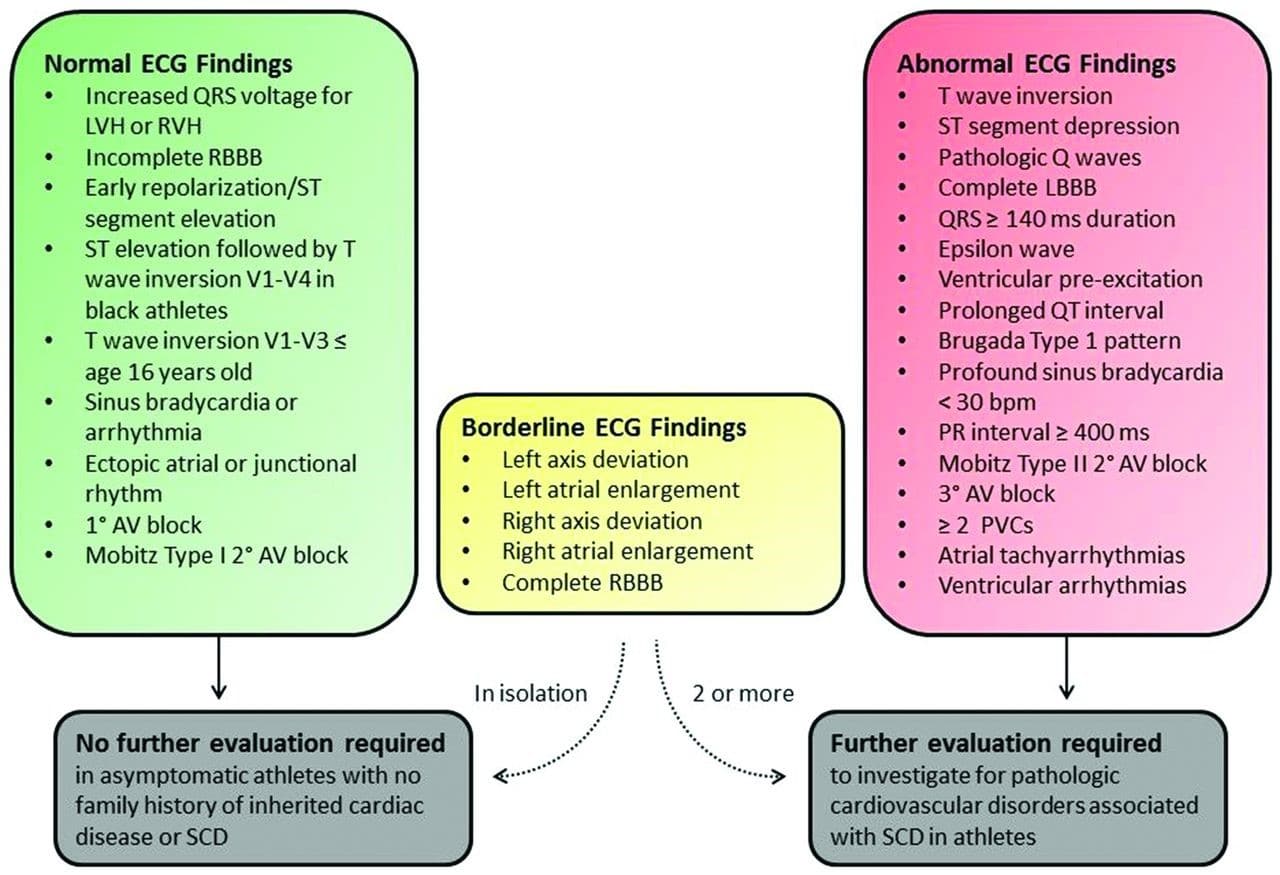 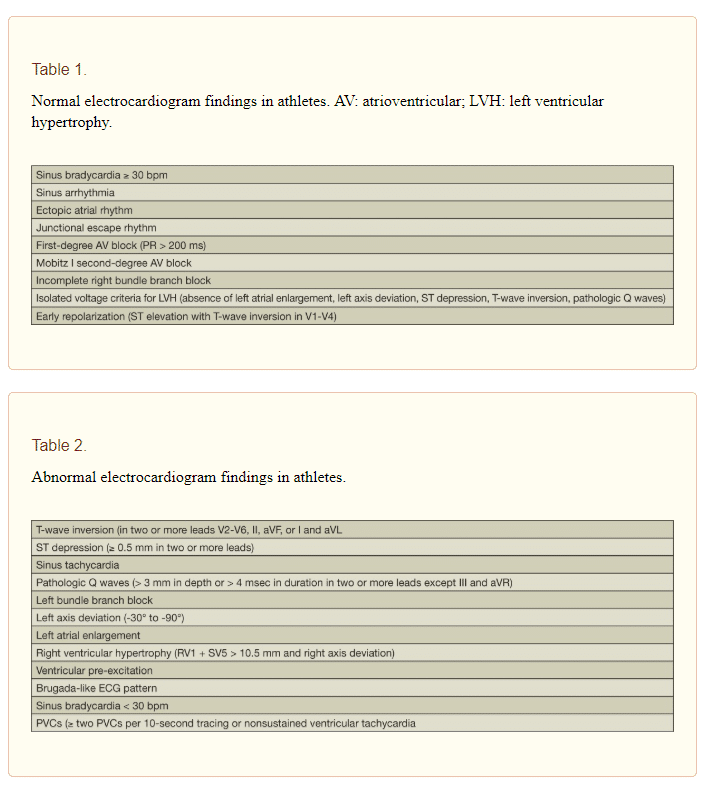