The Combined Usefulness of the Neutrophil-to-Lymphocyte and Platelet-to-Lymphocyte Ratios in Predicting Intravenous Immunoglobulin Resistance with Kawasaki Disease. 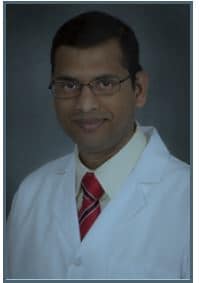 Many scoring systems and laboratory biomarkers have been evaluated to predict IVIG resistance, as changes in treatment strategy may alter coronary artery involvement.

Kanai et al. report the utility of two blood cell type ratios, Neutrophil to Lymphocyte ratio( NLR) and Platelet to Lymphocyte Ratio, calculated before initiation of IVIG in predicting the ability of IVIG resistance in KD patients. The current report is an expansion of the same authors’ pilot study that suggested the benefit of the combination of these ratios in predicting IVIG resistance. Small sample size limited the single-center pilot study.

The current investigation is a retrospective, a multicenter cohort study of KD patients from seven hospitals in Japan admitted between March 2004 to Feb 2017. The datasets were divided into the development dataset (March 2004 to Mar 2014) and the validation cohort (April 2014 to Feb 2017).

Classic diagnostic criteria were applied, and IVIG resistance was defined as persistent fever lasting > 24 hrs. after IVIG completion or recrudescent fever after an afebrile period.

Receiver operating characteristic curves were constructed using the development dataset, and the most discriminating cut off values was used to assess sensitivity, specificity, PPV, and NPV when applied to NLR and PLR in predicting IVIG resistance. The predictive marker obtained was applied to the validation dataset to determine predictive accuracy.

A total of 852 patients were analyzed, with 520 representing the development dataset and the rest validation dataset. IN both the datasets, the NLR, PLR, cell count of neutrophils, ALT, AST, CRP Gunma score, and Kurume score were significantly higher in the IVIG resistant group than the active group. A ROC analysis showed the best cut off values of NLR and PLR were 4.11 and 119, respectively. Multiple regression analysis of the age at onset and other variables with a significant difference between the IVIG responsive and the resistant groups in the development dataset showed that both the NLR> or = 4.11 and PLR> or = 119 were independent predictors of IVIG resistance in KD with OR of 2.86 and 1.95 respectively. When combined the adjusted odds ratio was higher at 4.33 ( 95% CI 2.43-7.71; p<0.001).

The new predictive marker of the combination of NLR > 4.11 and PLR > 119 had a significant high adjusted OR of 2.6 in the validation set, suggesting it was as accurate in predicting IVIG resistance in a different dataset. The sensitivity and specificity of the new predictive in the validation data set were 0.54 and 0.72, almost the same in the development dataset. The marker also performed equally well, compared to the Gunma score and Kurume score in predicting IVIG resistance.

The authors present an easy-to-calculating predictive marker of a combination of NLR and PLR to predict IVIG resistance. Whether this novel and low-cost evaluation to predict IVIG resistance could be applied to different patient populations across the world is uncertain, but the authors opine that as these ratios simply focus on response to inflammation, they should work regardless of ethnicity. 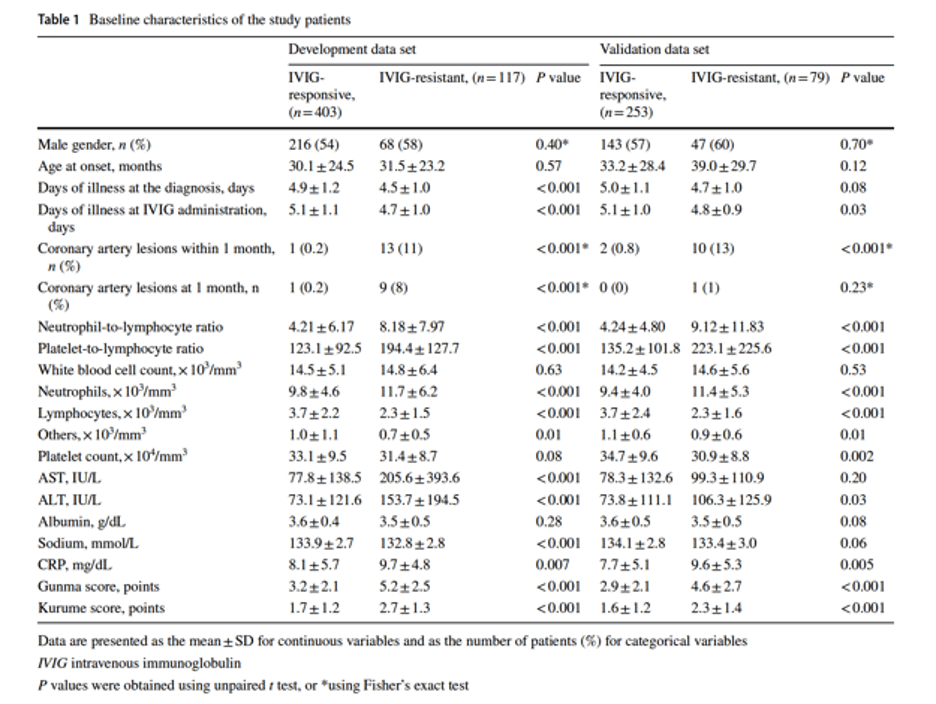 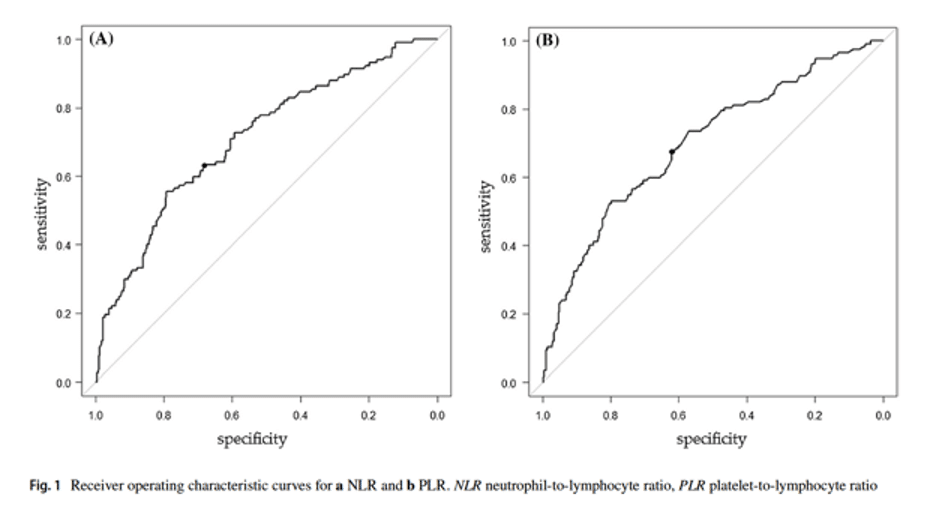 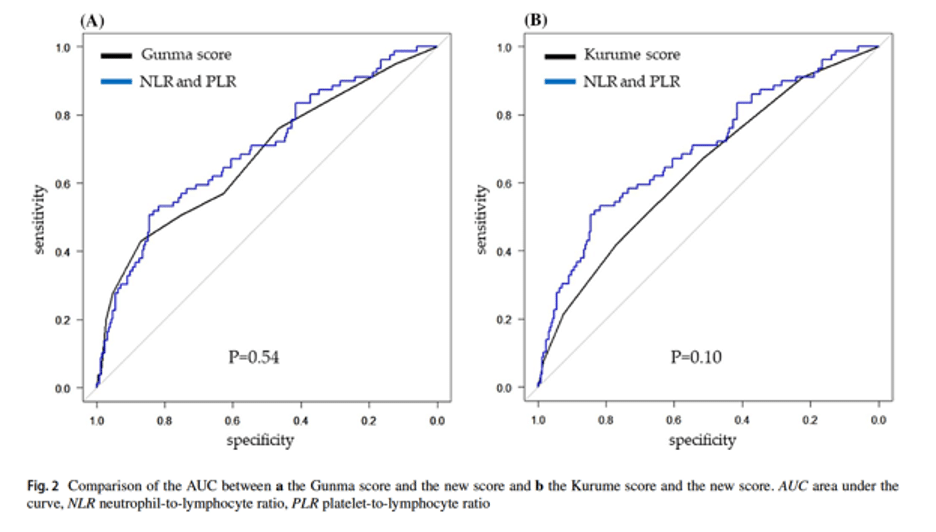 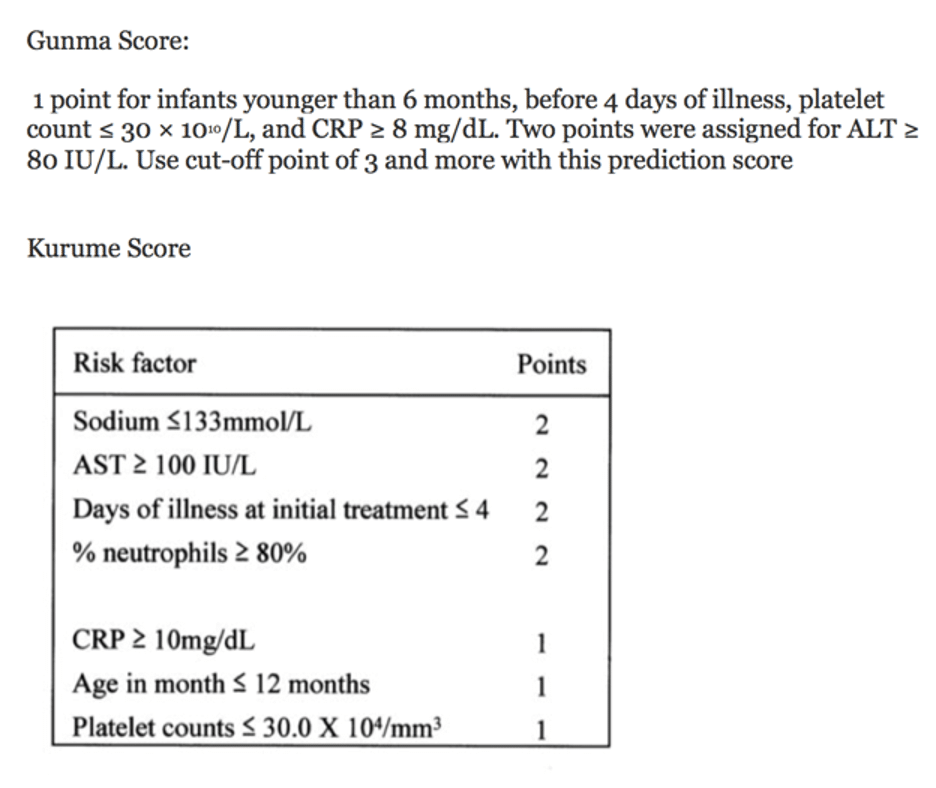