Utility of routine screening fetal echocardiogram in pregnancies conceived by in vitro fertilization. 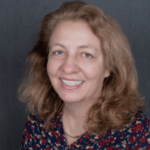 Treatment with ivf is being used increasingly in pregnancy. About 2% of live births in the US are the results of ivf. Early on, there was concern that children conceived by ivf had higher incidence of congenital malformations, and therefore ivf constitutes an indication for fetal echocardiography per guidelines of the IAUM, AHA and ASE. More recent research, however, has shown that the incidence of all birth defects in IVF pregnancies is comparable to the general population rate

The purpose of this study was to evaluate the incidence of congenital heart disease in pregnancies conceived by ivf and to evaluate the validity and utility of the current recommendations for fetal screening by echocardiography.

This was a cohort study comparing a prospectively maintained database of all fetal echocardiograms performed at Yale New Haven Hospital from 2012 to 2018 and pooled data from the Connecticut Birth Defects Registry and statewide hospital discharge data between 2011 and 2015. The database recorded the indication(s) for the fetal echocardiogram. The investigators included in the evaluation only those fetuses screened for primary indication of ivf and excluded from evaluation those with additional indications such as patients with a previous child with a CHD, a family history of CHD, medication exposure, diabetes, anomaly in previous pregnancy, cardiac or other abnormality noted on previous ultrasound, or monochorionic twins.

To serve as a control group, pooled statewide data from the Connecticut Birth Defects Registry and hospital discharge data for all infants less than 12 months of age in the state of Connecticut were searched for all ICD-9 and ICD-10 codes associated with structural CHD (Supplemental Fig. 1, available online). Diagnoses of atrial septal defect (ASD) and patent ductus arteriosus (PDA) were excluded from the control group because these would not be diagnosed by fetal echocardiography.

Out of 9252 fetal echocardiograms performed, 2040 were performed in individual ivf fetuses without additional indication for fetal ECHO as shown in the figure below: 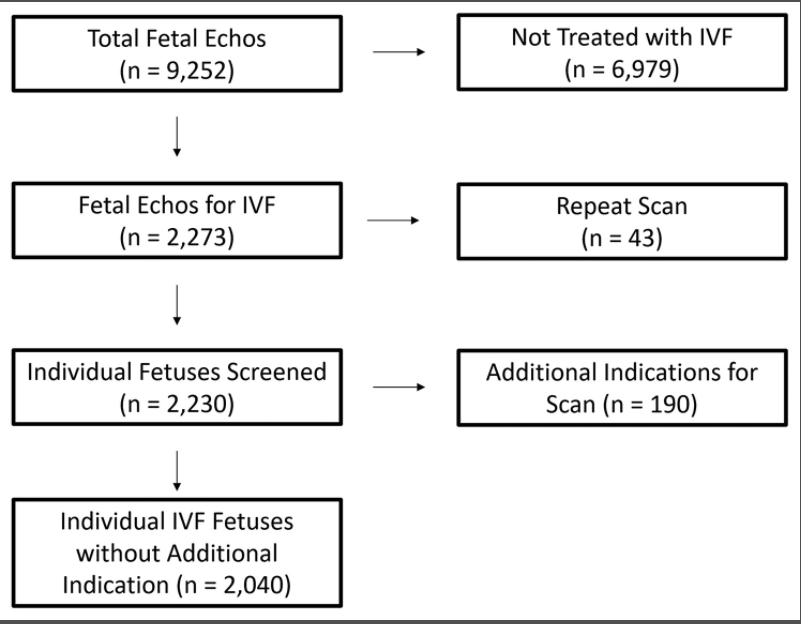 Among those without another indication for a fetal Echocardiogram, 1.3% had CHD (26/2040), while the incidence of CHD in IVF pregnancies with additional risk factors for CHD was 5.8% (P<.001).

Of those fetuses diagnosed as having CHD, 21/26 were diagnosed as VSDs. 8 of the prenatal diagnoses of CHD had resolved postnatally and the remainder had small defects that did not require any medical or interventional management postnatally. 4 patients had clinically significant CHD, one was a baby with a VSD and coarctation, another represented critical pulmonary stenosis, while the last two were vascular rings.

Overall the incidence of CHD postnatally in infants conceived by ivf without any other indication for fetal echocardiography was 0.9%. The number of fetal echocardiograms required to detect one case of clinically significant CHD in IVF pregnancies without other risk factors was 510.

Pooled data from the Connecticut Birth Defects Registry revealed an incidence of CHD other than PFO, ASD or PDA at 0.91% of births.

This data and the Odds Ratio (OR) for presence of CHD are shown in the figue below:

The incidence of CHD after a pregnancy conceived by ivf compared to that of the general population was increased.

However, when pregnancies with additional indications for fetal echocardiography were excluded from the analysis, there was no difference in the incidence of congenital heart disease present at birth in infants born after ivf that did not have any other indications for fetal echocardiography screening compared to all births in the state of Connecticut.

It is important to note that the patients in the IVF cohort received routine comprehensive level II fetal anatomy scan between 18 and 20 weeks of gestation as part of their obstetric care. Categorization of an IVF pregnancy as “low risk for CHD” requires a finding of grossly normal cardiac anatomy according to the level II sonogram.