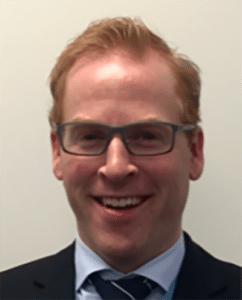 Progressive aortic dilatation – especially of the aortic root – and subsequent aortic dissection is the leading cause of morbidity and mortality in patients with Marfan syndrome (MFS). Prophylactic aortic root surgery is performed to mitigate this risk based on threshold values for aortic diameters, with aggressive surgical intervention resulting in improved life expectancy over recent decades. The distal aorta is also at risk of dissection, often at near normal diameters, after aortic root surgery. The authors of the current study hypothesized that aortic distensibility could act as a potential predictor of distal aortic events, with the aim to evaluate aortic distensibility as a predictor of aortic complications in MFS patients over time. They also sought to assess differences in rates of decline of distensibility in men versus women, and to assess the influence of medication use or aortic surgery on the rate of distensibility in individuals with MFS.

A retrospective analysis of MFS patients who participated in two MRI based trials through Amsterdam UMC was performed. The first trial between 1996-2002 provided baseline characteristics of the study population, and the second between 2008-2012 offered additional information on medication use and events. Follow up data regarding aortic root replacement, aortic dissection and death was available until 2018 through an extended database. Only patients who completed both trials (comprising four MRI studies) were included in this analysis. All CMR scans were performed with a 1.5 Tesla MR system, using commercially available gadolinium-enhanced spoiled gradient echo techniques to visualize the entire aorta. High resolution gradient echo pulse sequences were applied perpendicular to the aorta in the ascending aorta (level 1), the descending thoracic aorta at the level of the bifurcation of the pulmonary artery (level 2), and the descending aorta at the level of the diaphragm (level 3). Blood pressure was measured non-invasively during each CMR scan. Aortic distensibility was re-measured and re-calculated per patient on all four scans at each level by a single analyst using a software. Distensibility at all levels was analyzed using linear mixed-effects regression models. Linear regression lines were found to best fit the distensibility data. Additional fixed effects were sex, medication use and aortic root surgery as time-dependent covariates, as both main-effects and their interactions with age. A change point model evaluated change in rate of distensibility loss before and after surgery and before and after start of medication use.

Of 78 adult patients participating in the first trial (1996-2002), 41 were also included in the second trial (2008-2012) and of these, 35 patients had complete CMR and blood pressure data available to be utilized in the current study. All had diagnoses of MFS according to the Ghent criteria of 1996. Sixteen (46%) of subjects were female (Table 1). At baseline, aortic dimension was significantly higher in men at all levels as compared to women. None of the 35 patients had undergone aortic root surgery, whereas at follow up in 2018 (22 years), 19 patients (54%) had undergone prophylactic aortic root surgery and three of these experienced a Type B aortic dissection at some point after their surgical intervention.

Aortic distensibility at all levels decreased approximately linearly with age and was significant at level 2 and level 3 before and after correction for blood pressure (Figure 3). 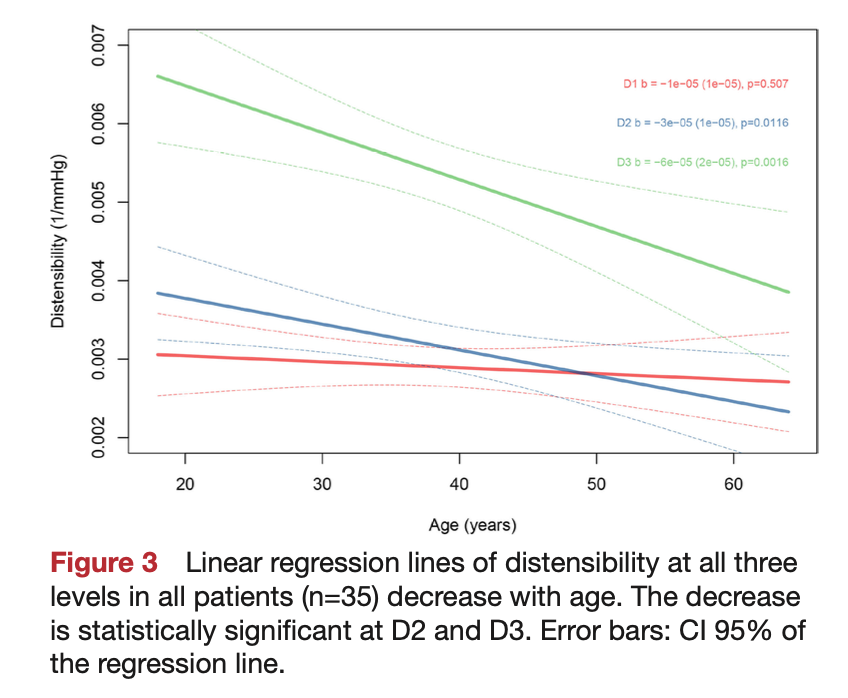 At baseline, distensibility at all levels was higher in women, and deteriorated over time. Men had low distensibility at inclusion, without further decline over time. Compared to unmatched healthy control data described in available literature, men with MFS in this cohort had a similar rate of decline in distensibility at level 2, whereas women with MFS had a greater rate of decline at this level than in controls. Men with MFS underwent aortic root surgery at a significantly younger age than women in this cohort (37 vs 44 years, p<0.001), noting significantly greater aortic root dimensions at the time of inclusion in men versus women (45 vs 40 mm, p<0.001).

Rate of distensibility loss did not differ during follow up in patients with native aortic roots and those who had undergone prophylactic aortic root surgery. Similarly, no difference was observed in the setting of either beta blocker or losartan prescription.

The authors conclude that patients with MFS have low distensibility at all levels of the aorta from a young age, but that aortic distensibility is not a suitable predictor of aortic events. The study has several inherent limitations, namely the retrospective nature, small sample size, and reliance on data of unmatched healthy controls described in literature. Correction for blood pressure was also reliant on single-point measurements during CMR testing. Ultimately, accurate prediction of aortic events after aortic root surgery remains elusive.