Baffle Complications in Adults After Atrial Switch for Transposition of the Great Arteries. 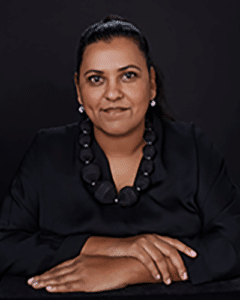 Baffle complications remain a rather overlooked subset of late complications following atrial switch operations for TGA. Interventions for baffle complications have been done for both baffle leaks and baffle stenosis in symptomatic patients. The use of percutaneous intervention for asymptomatic patients is also increasing. The scope of these complications is poorly studied and it’s diagnosis on conventional transthoracic echocardiography limited. For this reason, guidelines recommend routine interval screening by advanced imaging (CT/MRI). The prevalence on previous studies by these modalities on routine screening was 40-60% (though many study limitations noted in these cohorts). This dual-center study conducted in the Netherlands had 3 aims:

A cross-sectional imaging sub-study (2017-2019) of participants in the Dutch CONCOR registry (2001 onward) was done looking at a standardized screening protocol for baffle complications, instituted in both centers in 2017. All patients had a routine contrast-enhanced transthoracic echo with agitated saline during rest and exercise to assess baffle patency – agitated saline (after a test injection to exclude a large R-L shunt in case of a baffle leak) is performed using 8mL agitated saline and graded upon the amount of bubbles seen in the systemic ventricles within 3 cardiac cycles.

Since 2017, both centers involved in the study instituted CT (arterial and venous phase scanning) as part of routine screening. Systemic venous baffle dimensions were measured and stenosis was defined as a transverse luminal diameter <10mm.

There were 67 patients with arterial switch surgeries for TGA in the CONCOR Registry. Mustard repairs were done in 85% (n=57). Patients were followed up for a median of 9 years. Baffle interventions were performed in 36% (n=24), with 46% having re-interventions. Fourteen had their interventions prior to enrollment in the CONCOR registry with no details available. Most patients presented with increasing symptoms (effort intolerance, fluid retention or desaturation). Indications for intervention included:

No patients experienced strokes, 5 died (3 heart failure, 2 infective endocarditis) and 12 were lost to follow-up. Figure 3 below shows a cumulative risk of re-intervention for baffle complications as 25% at 15 year follow-up: 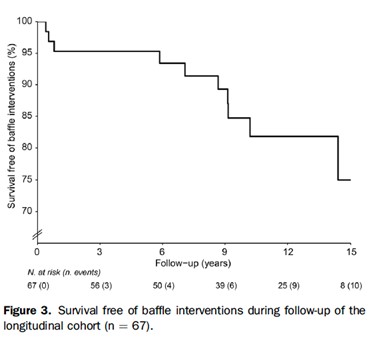 Fifty patients had CT scans. Of the 29 patients who had both contrast-enhanced transthoracic echo (CE-TTE) and CT, 4 (14%) had no baffle complications; 11 (38%) had baffle leaks only; 5 (17%) had stenosis only and 9 (31%) had both stenosis and leaks. Systemic venous to systemic arterial circulation (R-L) shunting was found in 69% (n=20) of patients – none of them had known or suspected shunting. In 8 patients (40%) the shunting was spontaneous without provocation. Both exercise and Valsalva maneuvers increased the diagnostic yield on CE-TTE. 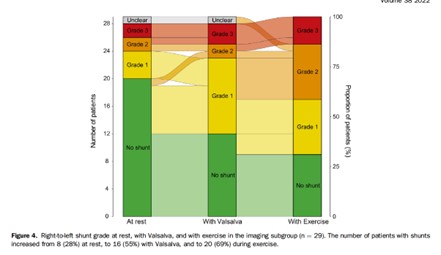 There was no statistically significant associations between clinical characteristics (including oxygen saturation at rest or exercise) and the presence of baffle leaks.

Baffle stenosis was associated with a lower peak work rate noted on exercise echocardiography (89 ±24W vs 123±21W, p<0.001) – figure 5 below. This remained significant even after correcting for body surface area (p=0.003). Peak Doppler flow over the systemic venous baffle was not associated with the presence of anatomic stenosis (<10mm diameter) on CT (1.1 vs 1.0m/s for those with and without stenosis respectively; p=0.53). 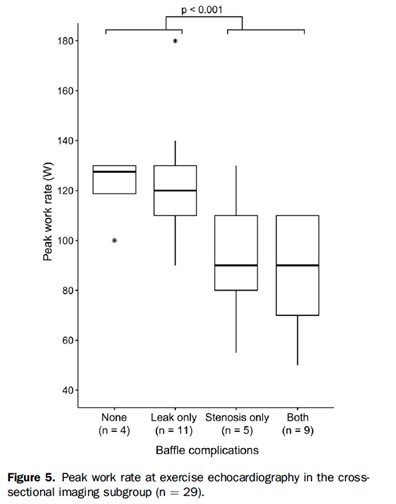