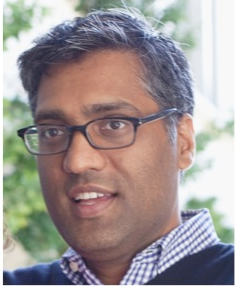 Comment from Dr. Akash Patel (San Francisco), section editor of Congenital Electrophysiology Journal Watch  Atrial tachycardias are a common complication in patients with congenital heart disease. These include atrial fibrillation, focal atrial tachycardias, and macro reentrant atrial tachycardia (flutter/IART).  Presence of atrial fibrillation/atrial flutter/IART have been shown to increase morbidity (heart failure, stroke) and mortality. This has resulted in the increased use of catheter ablation as primary therapy due to the long-term side effects and efficacy of medical management. The overall acute success rates have improved over time and reported to be between 70-90% but recurrence rates continue to be high (40-60%). The predictors for acute and long-term success are limited and the focus has been on IART. This single center study (Columbia University, NY) aimed to describe the spectrum of atrial tachycardia referred for ablation, determine predictors for acute success, and determine risk factors for atrial tachycardia free survival in adult patients with congenital heart disease.

This was a retrospective single tertiary center study of all consecutive patients with congenital heart disease who underwent ablation procedure for atrial tachycardia from December 2005 to July 2017.  Subjects were excluded if the primary indication for the procedure was for SVT due to AV node reentry, SVT due to accessory pathway, or VT. Baseline clinical, electrocardiographic, ablation and mapping data were included.

Ablation success was defined as termination of all atrial tachycardias during radiofrequency ablation and non-inducibility with programmed stimulation after ablation. For patients with macro-reentrant atrial tachycardia with a critical isthmus, bidirectional conduction block was confirmed.

The baseline cardiac rhythm was atrial tachycardia in 66%.   There was no mention of prior atrial fibrillation.  The atrial tachycardia cycle length was 275 ± 5 msec . There were 180 atrial tachycardias (spontaneous or induced) noted in 140 patients. 23% had 2 mechanisms and 3% had > 2 mechanisms. 93% (n=170) were macro-reentry and 7% (n=12) were focal.  Of the macro-reentry arrhythmia types, 84 (49%) were cavotricuspid isthmus (CTI)-dependent and 19 (11%)  were mitral isthmus–dependent.  45% of patients had  CTI dependent flutter as the only mechanism.

Acute success was seen in 124 (89%) of the overall cohort. Acute success for CTI dependent flutter was high at 98.4% but the success for > 1 mechanism or complex single mechanism was lower at 80%. On multivariate analysis, presence of a single arrhythmia mechanism was associated with acute procedural success (HR 0.27, p=0.03) but not CTI dependent flutter.   On multivariate analysis, presence of a Senning/Mustard (HR 4.46, p=0.05)  and non CTI-Dependent flutter (HR 3.74, p=0.04) were associated with procedural failure. See Figure Below. 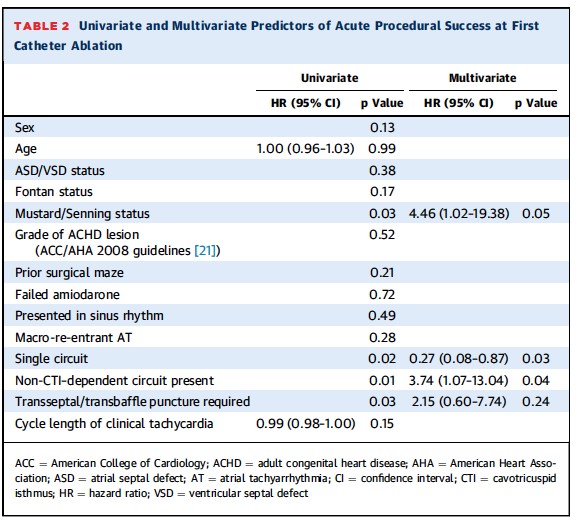 Atrial tachycardia recurrence after the first procedure was common and seen in 44% with a median time to recurrence of 49.9 months (IQR: 6.7 -73.7). See Figure Below. 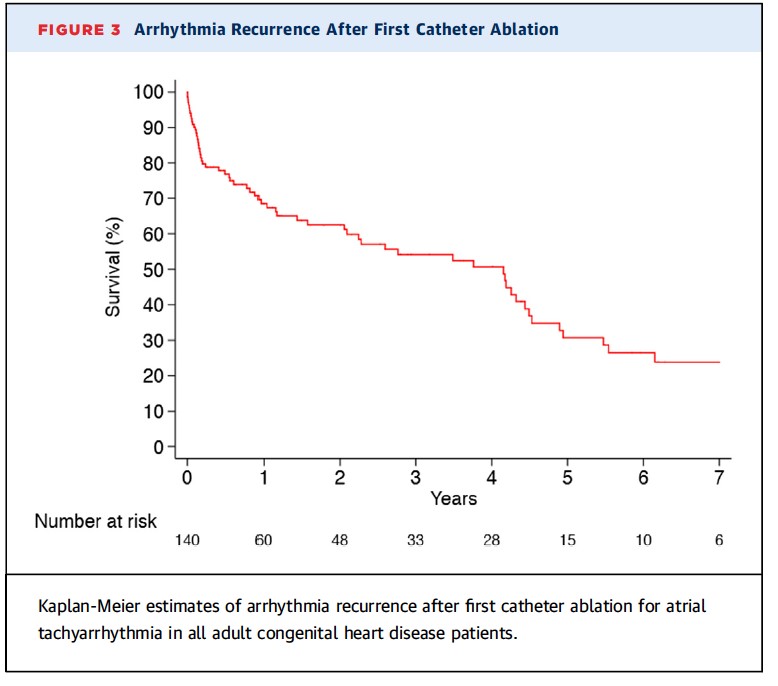 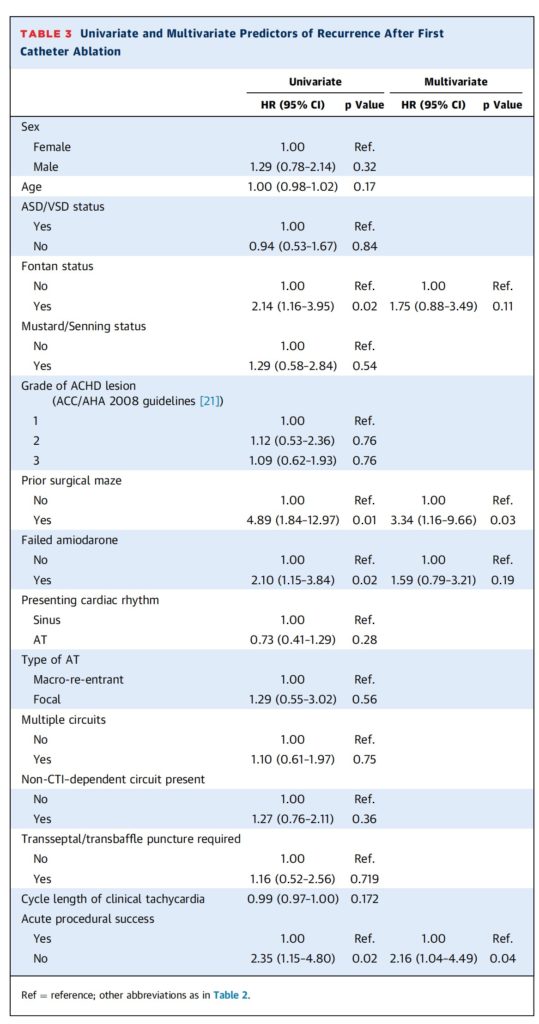 A second procedure was attempted in 68% of patients who had recurrence.  The baseline cardiac rhythm was atrial tachycardia in 69%.   There was no mention of prior atrial fibrillation. There were 57 atrial tachycardias (spontaneous or induced) noted in 42 patients. Of these patients, 52% had a new atrial tachycardia. 93% (n=53) were macro-reentry and 7% (n=4) were focal. 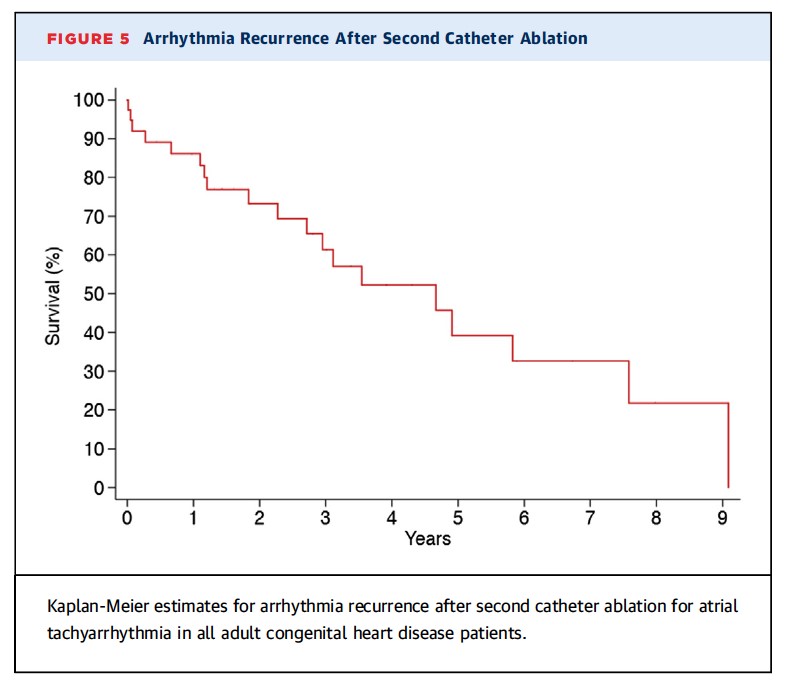 Catheter ablation for atrial tachycardias in ACHD patients was safe in this cohort. The incidence of major complications was low at 1.4% (n=2). There was one patient with post-procedure AV block requiring a pacemaker and one patient who died of an acute stroke 1 month after procedure.

Of note, the overall incidence of death or transplant in this cohort was significant at 7% over  the 8 year study period. 8 patients died a median of 9.2 months after the procedure and 2 had heart transplant. There are no details of who these patients are but this is consistent with known data on atrial arrhythmias and morbidity and mortality in ACHD patients.  It would be important with the authors detailed if these patients were procedural success or failure, the arrhythmia mechanisms noted, and if they had recurrence despite ablation attempts.

This study demonstrates that the acute success rates for atrial tachycardias are comparable to published data at 89%  and the majority are macro-reentrant.   Risk factors for acute procedural failure were noted to be Mustard/Senning patients and non-CTI dependent IART. As other studies have demonstrated, Mustard/Senning patients pose technical challenges for ablation but success can be improved with ablation techniques and approach.  In addition, this patient cohort will continue to shrink with the advent of the arterial switch operation as demonstrated by this cohort (9%).

The risk of recurrence as expected is dependent on acute procedural success. However, like other recent studies have shown,  the majority of recurrence was due to new arrhythmia mechanisms.  The use of ablation and need for repeat procedures may be common but long term success without the need for chronic antiarrhythmic medications may be achievable in this relatively young adult old cohort.  Of note, this study did not assess the impact of atrial fibrillation which is important.  Other recent studies have shown this to be a risk factor for acute procedural failure and recurrence.  It is unclear what portion of the cohort had atrial fibrillation but 39% required cardioversion. The impact of this arrhythmia on acute procedural success and recurrence would be important.  In particular, there was an acute stroke noted in one patient 1 month after an ablation that resulted in death. Overall, this studies adds to the growing data that ablation can be successful,  but recurrence is common and repeat procedures are often needed.  With continued advances in mapping and ablation strategies for catheter and surgical approaches,  hopefully there can be continued improvements in the acute and long-term success of ablation for atrial arrhythmias in ACHD patients.