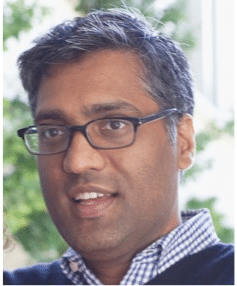 Defibrillation threshold testing (DFT) has been routinely done at the time of implantable cardioverter defibrillator placement or replacement. Over time this practice has changed with ~ 50% of adult cases undergoing DFT testing. This has been due to the advent of higher voltage devices and adult studies showing the safety and efficacy of omitting testing. The impact of this change in device testing practices on patients with congenital heart disease is unclear.   In addition, traditional DFT testing to avoid multiple inductions and shocks has shifted to the use of defibrillation safety margin (DSM) testing with at least a 10J safety margin below the maximal output of the device. This study examined the prevalence of DSM testing at the time of ICD insertion, predictors of testing, factors associated with an inadequate DSM testing, and the rate of in-hospital adverse events associated with DSM testing in patients with CHD.

This was a retrospective study of the National Cardiovascular Data Registry (NCDR) ICD Registry between April 1, 2010, and March 31, 2016.  All congenital heart disease patients (pediatric and adults) were included. A total of 7024 patients were analyzed. The vast majority had a transvenous system with only 30 (0.4%) receiving an epicardial non-transvenous ICD system. DSM testing was performed in 3,654 patients (52%) and not performed in 3,370 patients (48%).

The prevalence of DSM testing overall was 48%. There was a decrease in DSM testing from 64% in the 2ndquarter of 2010 to 31.4% in the 1st quarter of 2016. There was no difference in those patients who received devices for primary vs secondary prevention and initial implant vs at generator change.  See figures below. 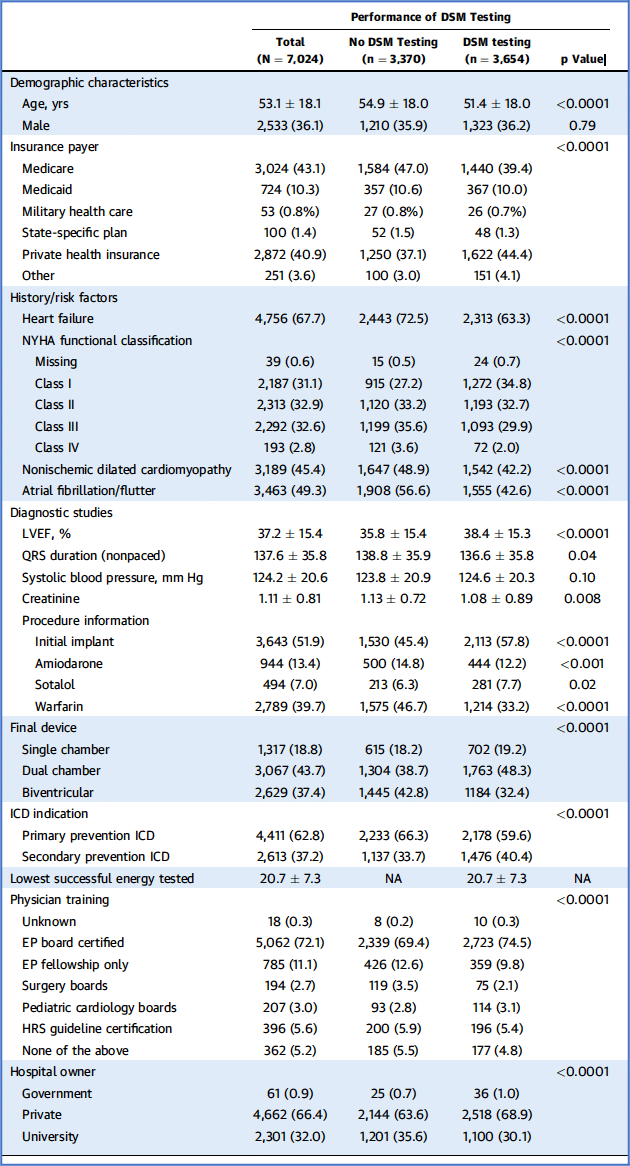 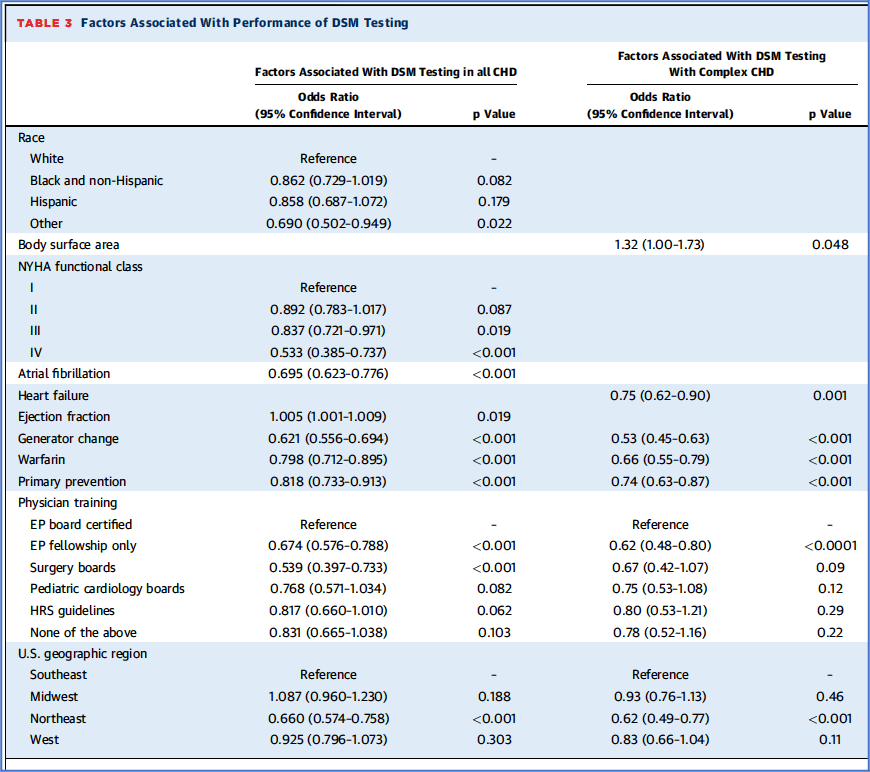 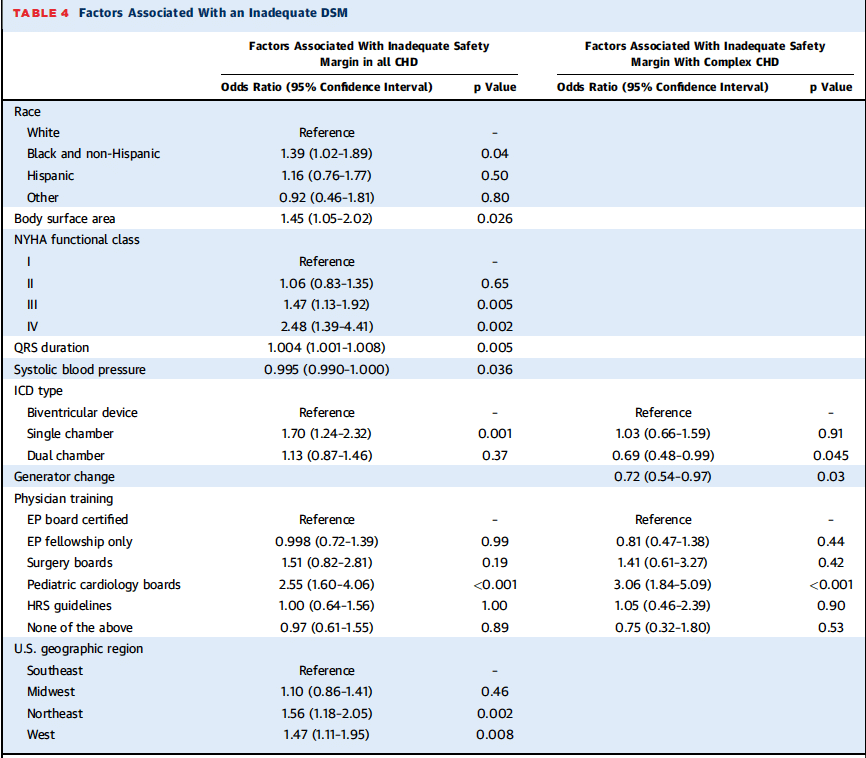 The overall adverse events included any complications in 2.3%, in-hospital mortality in 0.41%, and DSM-related complications in 1.2%.  DSM-related complications were defined as cardiac arrest, cardiac perforation, lead dislodgement, myocardial infarction, pericardial tamponade, peripheral embolus, transient ischemic attack or cerebral vascular accident, or urgent cardiac surgery.  There was no difference in complications or mortality between the DSM testing and no DSM testing groups on univariate and multivariate analysis.  Those with DSM testing had a shorter length of stay (LOS) (3.23 vs. 3.85 days) and a less prolonged post-procedural LOS > 3 days (8.1% vs 11.4%).   Of note, there was no differences in outcomes or post-procedural length of stay based on inadequate DSM testing. See table below.

Overall, this study demonstrated a decline in the use of DSM testing during ICD placement or generator changes to 31.4% in patients with congenital heart disease. This occurred overtime in conjunction with adult data and guidelines to support the potential role to omit testing. Of note, was the limited clinical data on DSM testing in congenital heart disease patients over the study time frame.

The study also demonstrated clinical, device, and provider factors that played a role in those who omitted or underwent testing and those who had inadequate DSM testing. DSM testing was more likely to be omitted in patients who underwent primary prevention ICD placement or were deemed higher risk due to severity of heart failure or associated comorbidities – atrial fibrillation and warfarin.  This avoidance in testing likely represented perceived concerns with procedural complications in DSM testing which was not supported by the findings of this study. Inadequate DSM was more likely to occur in patient who were black and non-Hispanic, had more severe electromechanical disease (heart failure or QRS prolongation) or received a single chamber device.  Social determinants of health including race have been shown to impact use and counseling for ICDs and need further exploration in congenital heart disease patients.   Device selection also played a role, but multiple implant variables were not accounted for in this study such as device location and maximal programmable energy delivered by devices which may have changed from 2010 to 2016 based on manufacturer.

This study does have some limitations.  First, the cohort was older and was not stratified by age (i.e., adult vs pediatric) which may play a role in DSM use, testing outcomes, complications, and length of stay.  Second, there was no mention of single vs dual coil leads, shock vector orientation, or location of the pulse generator (right vs left chest, abdominal, subpectoral vs prepectoral) which may play a role in the lowest energy used for successful DSM testing.  Third, the granularity and complexity of congenital heart disease, cardiac position (levocardia vs dextrocardia), associated cardiac surgery, and ventricular mass (i.e., associated hypertrophic cardiomyopathy) are unknown which would impact the use of DSM testing, results of DSM testing, and procedural complications which are solely defined as in-hospital. Fourth, it is unknown how many attempts for DSM testing were done and if the system was revised due to inadequate DSM testing.  Finally, this study was not designed to assess the most important question of whether omitting DSM testing is safe and non-inferior to DSM testing regarding clinical outcomes (i.e., appropriate and successful use of ICD therapy) and mortality.