Dobutamine stress cardiac MRI is safe and feasible in pediatric patients with anomalous aortic origin of a coronary artery (AAOCA).

Dobutamine stress cardiac MRI is safe and feasible in pediatric patients with anomalous aortic origin of a coronary artery (AAOCA).

Testing to reliably risk stratify patients with AAOCA has not yet been fully elucidated. It is well known that exercise stress testing, stress echo and nuclear perfusion imaging have a low negative predictive valve in detecting myocardial ischemia. This is especially true in patients with anomalous origin of the right coronary artery (AAORCA). This single center study from Texas Children’s Hospital prospectively enrolled all patients < 20 years old with AAOCA. DSCMR and dobutamine administration was performed via the following protocol showed in Figure 1. First pass imaging was added to the protocol due to previous research studies showing reversible ischemia preceding wall motion abnormalities.

Dobutamine increases heart rate and contractility, decreases systemic vascular resistance and increases coronary vasodilation which makes it a useful agent to increase oxygen consumption. Atropine was added to achieve the target HR of at least 150 bpm. They also targeted a calculated rate pressure product (RPP) of greater than 20×10^3 bpm*mmHg, which was considered an indirect estimate of high intermediate myocardial oxygen consumption. Inducible hypoperfusion predicts adverse outcomes in adults with ischemic heart disease, so this study was done to assess the feasibility and safety in the pediatric population and to help decision making with their cohort (eg. surgery vs. observation).

221 DSCMRs were completed on 182 patients. 14% had AAOLCA, 9% had intraseptal AAOLCA, and 77% had AAORCA.  Maximum dobutamine dose of 40 mcg/kg/min was given in 94% of studies, and atropine was given in 63%. Sedation was provided in 17% of patients primarily due to younger age. 86% achieved the target RPP. Heart rate did not affect first pass perfusion image quality and only HR > 85% age-predicted maximum reduced cine image quality, which was still adequate in all patients. Intraobserver agreement was very good. No major events (ventricular arrhythmia, MI, cardiac arrest) occurred, and 12.5% had minor events (severe HTN, chest pain, nausea/vomiting, paradoxical bradycardia, rash, anxiety, dizziness, or dyspnea) with none associated with sedation. 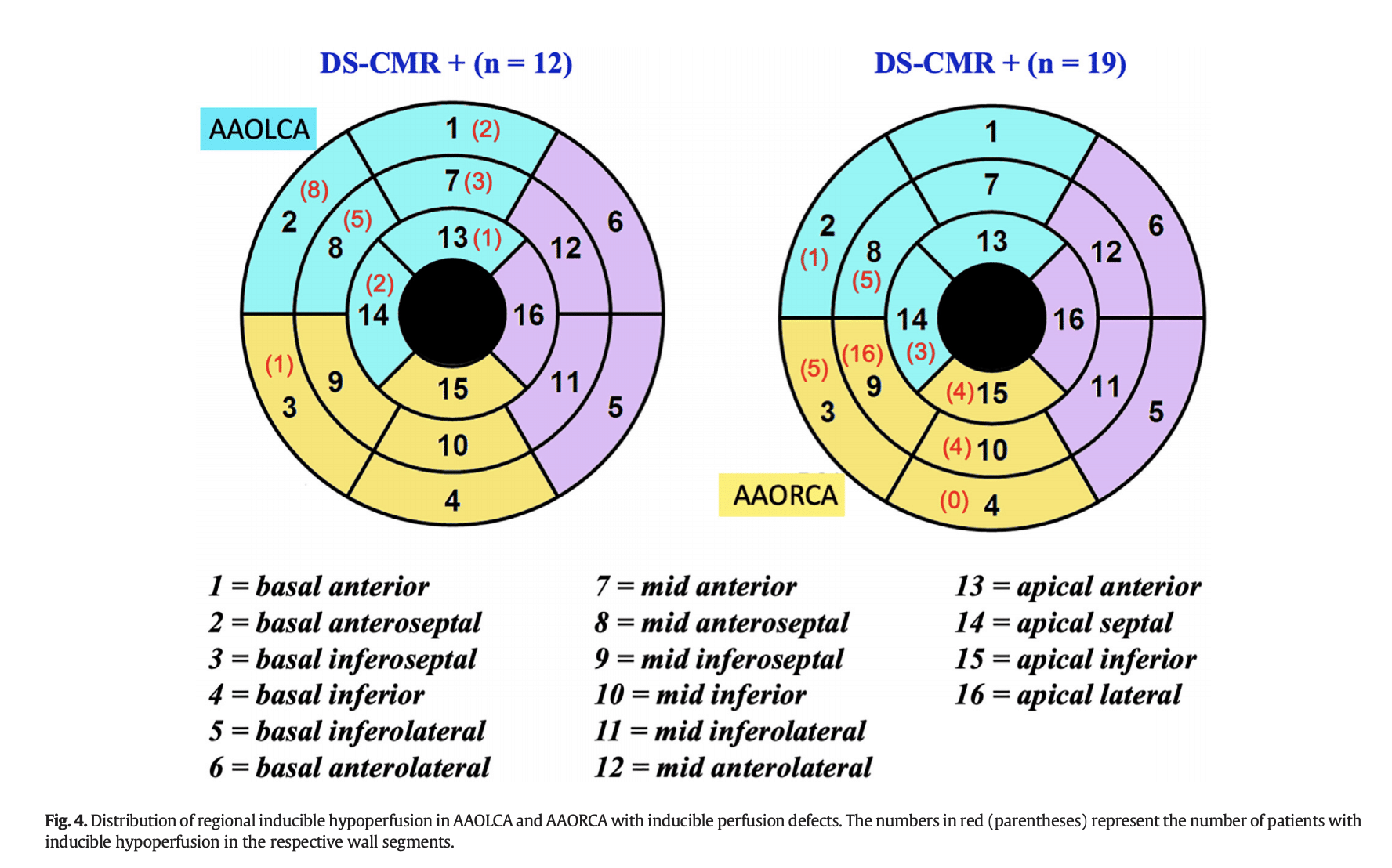 Inducible hypoperfusion was detected in 31/221, with 13/31 having wall motion abnormalities. See Table 2. 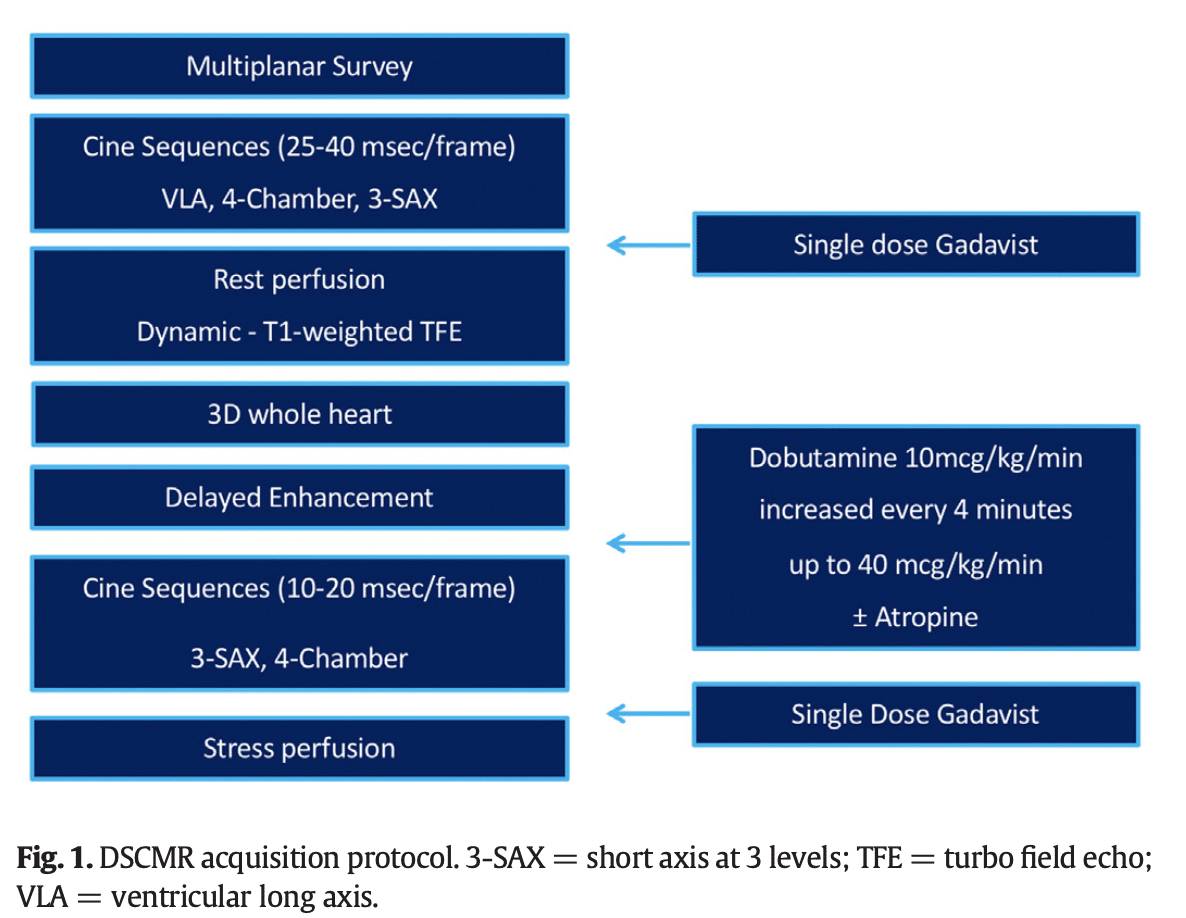 While this study was mostly observational/feasibility, it is important to mention a few caveats. First, it was not clear which patients received surgery, although this may be published elsewhere. Many centers will operate on all patients with AAOLCA regardless of stress testing or MRI, so the utility of DSCMR in this subgroup may be less relevant. Additionally, there was no mention of any patients who had exertional symptoms but a negative DSCMR.  There was no discussion on whether any assessment of the RV could be done on MRI, a known limitation of all stress imaging tests, including MRI, and potentially more important in AAORCA. The authors discuss the lack of an evidence-based target hemodynamic response in the assessment of FPP, so it could be possible that this is not providing the same hemodynamics as exercise or in the pathophysiology of sudden cardiac death. All pediatric and sports cardiologist hope that we can find better testing to risk assess this challenging population, specifically those with AAORCA, where many are diagnosed incidentally and are asymptomatic. This study was not designed to assess negative predictive value so longer term studies will be necessary. Overall though, it is very helpful to know that this test can be done with good quality, and with more centers adding this to the arsenal of testing, hopefully we will have more meaningful data in the future.