Commentary from Dr. Jared Hershenson (Greater Washington DC), section editor of Pediatric Cardiology Journal Watch: Left heart structure hypoplasia can range in severity from simple coarctation of the aorta to complete atresia of the mitral and aortic valves (MV and AV) and severely hypoplastic left ventricle. Sometimes, there may not in fact be any true anatomical hypoplasia such as in cases with restrictive deviated atrial septum primum or L-SVC to the coronary sinus. Fetuses with LV hypoplasia and possible coarctation of the aorta, and mild/moderate mitral and aortic valve (MV and AV) annulus hypoplasia, are referred as those with hypoplastic left heart complex (HLHC). Determination of which fetuses with these more borderline right heart vs. left heart structure size discrepancies will be able to have 2V circulation can be difficult. Additionally, with some evidence suggesting left heart structure growth with maternal hyperoxia treatment, albeit with some possible or at least unknown risks including smaller head circumferences at 6 months of age, determination of which fetuses may benefit is not yet clarified.

Methods: A retrospective cohort of fetuses with various left heart structure abnormalities were included for analysis. Those with classic HLHS, conotruncal abnormalities, or lesions that resulted in right heart chamber/structure enlargement were excluded. Fetal echocardiograms from 2 time points were analyzed: 18-26 weeks and 27-36 weeks GA. Measurements included annulus z-scores of all heart valves, TV:MV annulus dimension ratio, LV length z-score, LVEDV and RVEDV z-scores, LV:RV ratio, direction of flow across the foramen ovale (FO), distal transverse arch and isthmus diameter z-score. Postnatal data including need for PGE and type of surgical intervention (when necessary), as well as survival and need for later intervention were also obtained. The primary outcome was successful BV circulation, defined as any surgery that maintained BV circulation, and absence of death or transplant, labeled as Group 1, and those with single ventricle palliation, death or transplant as Group 2. Univariate analysis was performed to compare Group 1 and 2 for both fetal echo time points and multivariate analysis on Group 2 for the 27-36 week time point alone.

Results: The final dataset included 51 patients after exclusions and termination of pregnancy. 27 fetal echos were available at the earlier time point and 50 echos were available at the later time point. 37 patients underwent BV repair and 7 did not require any surgery. 5 patients underwent single ventricle palliation and 2 died. There were no demographic differences between the groups. Table 2 shows the univariate analysis between groups. At 18-26 weeks, greater AV and ascending aorta z-scores were found in Group 1. At 27-36 weeks, right to left FO flow, LVL z-score, RV length to LV length ratio, TV:MV annulus ratio, and antegrade or bidirectional aortic arch flow were associated with Group 1. Multivariate analysis of the 27-36 week echo showed only right to left/bidirectional FO flow and higher MV z-score associated with Group 1 (Table 4). Predictive accuracy of echo variables for Group 2 is shown in Table 5 and cut-off values for BV circulation in those with bidirectional FO is shown in Figure 2. All fetuses with R to L FO flow obtained BV circulation. In those with bidirectional flow, a LVL z-score of > -2.4 at 27-36 weeks and/or MV annulus z-score of > -4.5 were associated with BV repair. Late follow up at a median age of 4.3 years revealed that 13 patients required re-intervention. 12 with BV repair developed at least mild mitral stenosis and 5 developed subaortic stenosis. There were no late deaths.

Discussion: In this study, fetal R to L FO flow and bidirectional flow with a larger LVL and MV annulus z-scores were associated with postnatal BV circulation. An important caveat that most fetal cardiologists know is that very small differences of measurements of fetal structures can result in significantly different z-scores. Rate of change of LVL was also predictive on univariate analysis suggesting repeat fetal scans may be helpful. The authors note that their lower MV annulus z-score cut-off than other published papers may be partially due to the z-score nomogram used. Also importantly, post-natal assessment and decision-making is also not simple. There are patients that can undergo successful BV circulation even with a low Rhodes score. Evaluation of adequacy of left heart structures while on PGE can also oftentimes be difficult. The authors discuss their strategy of observation over the course of weeks in some patients to determine status after augmented LV filling. There was also a high rate of later intervention and re-intervention suggesting need for long term surveillance. Finally, the authors discuss the theoretical benefit of hyperoxia in these fetuses, but recommend further studies to determine selection criteria as well as effect on brain development before using this more indiscriminately. 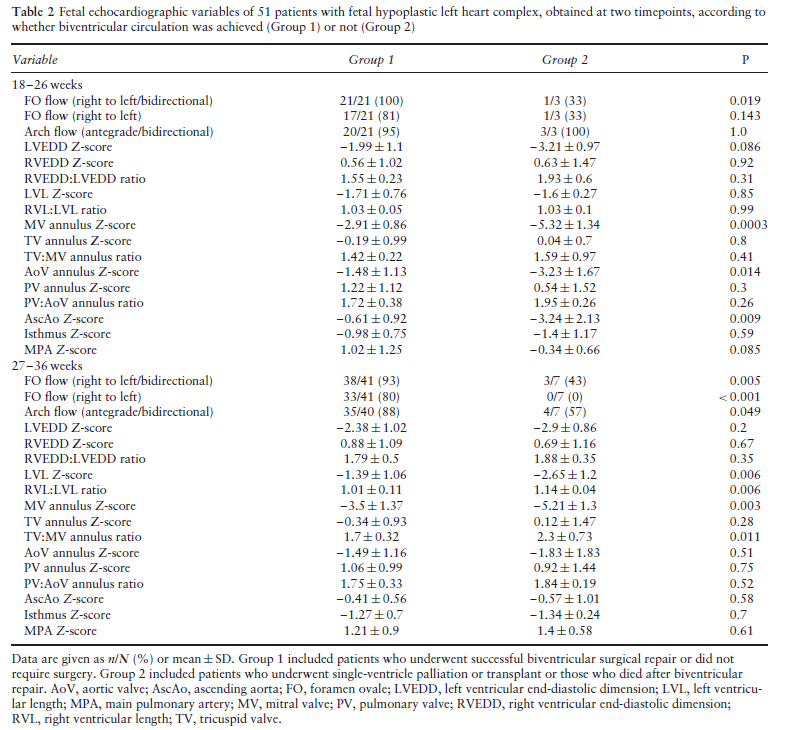