Impact of Specialized Electrophysiological Care on the Outcome of Catheter Ablation for Supraventricular Tachycardias in Adults with Congenital Heart Disease: Independent Risk Factors and Gender Aspects 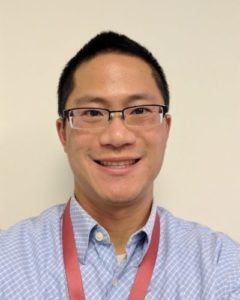 Comment from Dr. Philip Chang (Gainesville, FL), section editor of Congenital Electrophysiology Journal Watch: This study by Fischer et al provides a large scale retrospective analysis of outcomes of catheter ablation for SVTs in ACHD patients. The study was conducted by reviewing data from a large insurance carrier in Germany that insures approximately 9.2 million people. Patients >16 years old who underwent a first-time ablation for the treatment of SVT between 2012-2015 were included, with follow-up data reviewed up to 3 years after the time of initial ablation treatment. In addition to separating patients based on the presence or absence of CHD, many additional variables that were available in the data set were also included for detailed comparisons in outcomes, which were defined as either repeat catheter ablation or DC cardioversion for arrhythmia recurrence.

A total of 485 ACHD patients underwent 519 index ablation procedures compared to 21,489 non-CHD patients and 22,544 index ablation cases. Just under 14% of centers where procedures were performed were designated as ACHD specialty centers and 36.5% of all ACHD SVT ablations were performed in these centers. The overall number of ACHD ablations performed annually gradually increased during the inclusion period, together with an increase in the performance of ablations for more complex atrial arrhythmias including atrial fibrillation and atrial flutter. 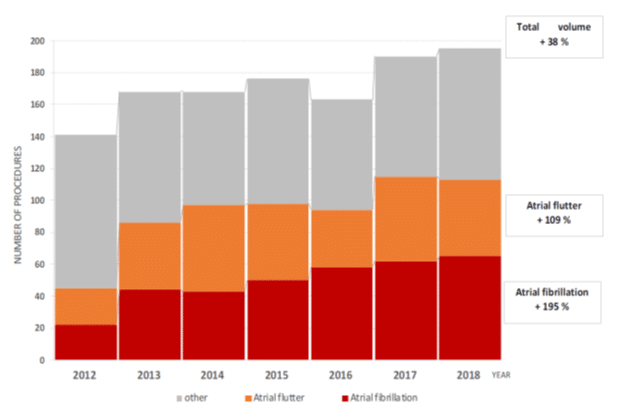 The authors were able to determine from data analysis that greater complexity ACHD underwent atrial flutter ablations more frequently than those with simple defects and that substrate location in atrial fibrillation ablation included right atrial targets in almost 20% of patients undergoing ACHD AF ablation. Women tended to be older than men at index ablation and more often underwent atrial fibrillation ablation at index intervention. Table 1 copied below shows that ACHD patients overall were younger than non-ACHD patients at the time of initial ablation and that >50% of SVTs were atrial fibrillation or atrial flutter (vs. 46% in non-ACHD).

Over 3 years of follow-up post-ablation, 36% of ACHD patients underwent re-intervention with either ablation or cardioversion (compared to 23.6% of non-ACHD patients) and re-intervention was largely driven by recurrent atrial fibrillation, then atrial flutter. Uni-and multi-variate analyses were performed to identify risk factors for recurrence with multi-variate analysis demonstrating higher CHD complexity, increased age, chronic kidney disease, and atrial fibrillation as independent predictors of recurrence and re-intervention.

When evaluating the association of ACHD vs. non-ACHD specialty centers, re-intervention was almost universally lower for patients who were treated at an ACHD specialty center. This was statistically significant among higher complexity ACHD patients and female patients. The authors were then able to develop gender-specific risk factors for risk of recurrence.

The study highlights factors that ACHD EP specialists have recognized, including the increasing complexity of SVT types ablated and the importance of delivering arrhythmia management in an ACHD specialty center. There are limitations that are introduced based on the retrospective design and some limitations to the degree of granularity of the data and variables themselves. That said, the data mining that was performed from a very large and extensive database afforded a substantial amount of information to evaluate trends in a very reasonable manner. The data itself seems to reflect a general trend toward the recommendation for ablation for ACHD SVT, which is reflected in the increasing trend in procedures performed and higher complexity types of SVT addressed. The study further highlights the greater complexity of arrhythmias in comparatively younger patients when it comes to the ACHD vs. non-ACHD populations. Finally, it is sobering that even with treatment delivered in ACHD specialty centers, SVT recurrence driving re-ablation or cardioversion was quite high. The impact of higher complexity CHD type, higher complexity SVT type, increasing age, comorbidities, and their contribution to creating vastly more complex substrates for treatment and therefore higher recurrence rates further highlights a recommendation to consider earlier ablative intervention for these arrhythmias in this complex patient population.