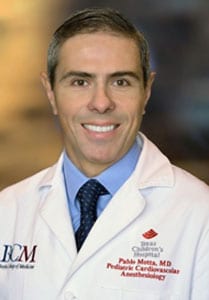 Commentary by Pablo Motta, MD a pediatric cardiac anesthesiologist at Texas Children’s Hospital in Houston Texas / Baylor College of Medicine:  Lung ultrasound (LUS) is a radiation-free tool used to diagnose pulmonary disease in the perioperative setting. Common diagnoses identified by LUS include pulmonary edema, atelectasis, pneumothorax and effusion. LUS has become a preferred alternative to CT in terms of accuracy and reliability and outperforms chest radiography in the critical care setting.

Atelectasis is one of the most common complications in pediatric patients undergoing general anesthesia either with an endotracheal tube or laryngeal mask, with an incidence of 68 –100%. Atelectasis compromises gas exchange, worsens lung mechanics and increases the risk of lung inflammation. Usually the effect of atelectasis is self-limited in otherwise healthy pediatric patients but can hinder the recovery of pediatric cardiac surgery patients. Furthermore, this group of patients is at an even higher risk of atelectasis due to surgical manipulation and lung collapse during cardiopulmonary bypass (CPB). Lung recruitment maneuvers have been described in the adult cardiac surgery population but there is little evidence in the pediatric cardiac surgical population.

In this single institution randomized control trial, the authors prospectively studied pediatric congenital heart disease (CHD) patients between the ages of 3 months to 3 years old scheduled for elective cardiac surgery with CPB under general anesthesia. Patients undergoing emergency surgery or who had a previous respiratory infection, pulmonary disease, genetic disorders, thoracic cage anomalies or abnormal lung imaging were excluded. The goals of the study were to: first, define the most useful lung region/s to diagnose atelectasis by LUS; second, compare the effects of pressure-controlled ventilation with and without low-level PEEP on lung aeration.

Forty patients were randomly allocated to either a control or intervention group.  The control group was placed on 0 cm H2O PEEP while the intervention group was placed on 5 cm H2O PEEP just after intubation.  Both groups had a LUS examination performed by the same experienced anesthesiologist 1-minute and 15-minutes post-intubation following induction of general anesthesia. Six areas of the lung were examined bilaterally for a total of twelve scanned areas: anteriorly at clavicular midline region (scans 1 and 2), laterally at the middle axillary catheter region (scan 3), posteriorly at the posterior axillary line at the fifth, sixth, and seventh intercostal spaces (scans 4–6).  The ventilation management was the same pressure control ventilation (PCV) with a peak inspiratory pressure to achieve a tidal volume of 8–10 mL/kg and an end-tidal CO2 of 35–45 mm Hg. The frequency was set at a rate of 16–30 breaths/min depending on the patient’s age and the inspiratory: expiratory ratio of 1:2. Furthermore the intervention group was maintained on 5 cm H2O PEEP after intubation until the second LUS.

Research shortcomings include being a single center study with a small sample size and having a single non-blinded anesthesiologist interpreting the images with its potential bias. The study population was not homogenous since it had wide age variation (3 month to 3 years), with the consequent size difference, and a mix of CHD (cyanotic and acyanotic). The intervention was brief (only 15 minutes of PEEP) leaving a substantial group of patients with persistent atelectasis (~30%). This poses the question whether higher levels of PEEP are necessary to completely eliminate atelectasis or if low-level PEEP for a longer period of time could resolve it.

Interestingly the study opens up the question if LUS should become a standard of care in the pediatric cardiac operating room to allow early diagnosis of atelectasis. Ultimately, this demands further investigations to determine the optimal level of PEEP required to completely resolve atelectasis without causing hemodynamic compromise.