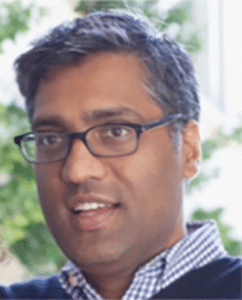 Commentary by Dr. Akash Patel (Cleveland, Ohio, USA) Congenital and Pediatric Cardiac EP section editor:Post-operative junctional tachycardia (JET) after cardiac surgery has been associated with significant morbidity and mortality. Management of this self-limited automatic tachycardia that arises from the AV junction (AV node and proximal His bundle) includes minimizing exogenous and endogenous catecholamines. Strategies may include minimizing inotropes, providing adequate sedation (i.e., use of dexmedetomidine), and cooling to mild hypothermia. Two antiarrhythmics, procainamide and amiodarone, have become a mainstay in treatment but carry proarrhythmic and hemodynamic side effects. IV Sotalol which has been available since 2009 has been shown to be useful for acute conversion of other arrhythmias in adult and pediatric patients. This study aimed to compare the outcomes of IV sotalol to IV amiodarone for management of post-operative JET in pediatric patients.

This was a retrospective single center study of all patients under 5 years of age with congenital heart disease who developed post-operative JET between December 2015 and December 2020 at Texas Children’s Hospital. Patients who received a different antiarrhythmic other than IV sotalol or IV amiodarone were excluded. Esmolol was not considered an antiarrhythmic for this study. Clinical variables and antiarrhythmic administration were assessed. Heart rate, heart rhythm, and invasive blood pressure assessments were captured from the bedside monitor and averaged at 15 seconds intervals using the Sickbay IT platform to assess the response to antiarrhythmic treatment. 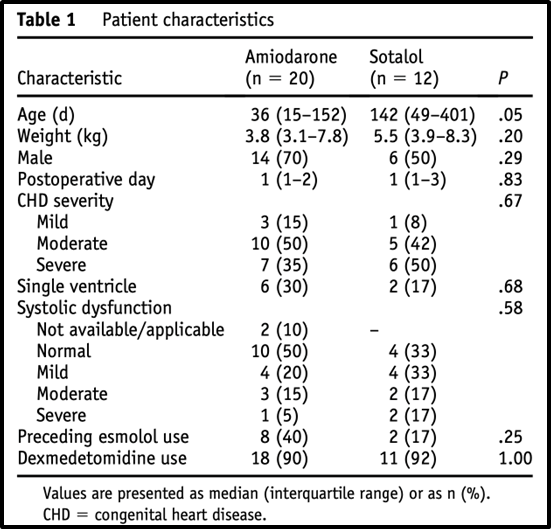 Success for treatment was defined as a reduction in the JET rate to <170 bpm, a decrease in the JET rate by 20% if the initial JET rate was < 170 bpm, and/or conversion to sinus rhythm within 24 hours and no requirement for escalation of therapy. Escalation of therapy (i.e., treatment failure) was defined as an addition or conversion to an alternative antiarrhythmic or need for surgical intervention (i.e., ECMO)

Overall success of JET treatment was seen in 78% of the total cohort with no difference between amiodarone (75%) and sotalol (83%), (p=0.72). The study did not provide a breakdown of success based on initial JET rate > 170, initial JET rate < 170 bpm, or percent converted to sinus rhythm within 24 hours.

Dosing regimens for amiodarone and sotalol were generally uniform based on institutional practice, but no set JET treatment protocols were described and followed.

Amiodarone was given as a 5 mg/kg bolus over 1 hour in 85%, as 2.5 mg/kg in 10%, and 1 mg/kg in 5%. The majority (75%) required multiple boluses (2.6 ± 1.8). Maintenance infusion was used in only 30% at a typical rate equivalent to 10 mg/kg/day. Of note, calcium boluses were given in 95% of patients prior to amiodarone initiation. Sotalol was universally given as a 1 mg/kg bolus over 1 year. 41% required multiple boluses (1.5 ± 0.5). Maintenance was initiated in 17% patients with a dose of 120 mg/m2/day divided every 8 hours. There were no differences in number of boluses in 24 hours or use of maintenance between sotalol and amiodarone. See Table below.

The hemodynamic effects of these antiarrhythmics were analyzed comparing the pre-bolus (60 minutes before to time bolus given) and the post-bolus (5 minutes after bolus to 90 minutes after bolus) heart rate and blood pressures. Only those given 5mg/kg amiodarone boluses were compared to sotalol. 8 total patients (40%) were excluded in the amiodarone group (7 due to variable amiodarone dosing and 1 due to incomplete Sickbay Data). No sotalol patients were excluded.

There was no difference in the pre-bolus HR between amiodarone and sotalol (170 vs 163 bpm, p=0.33). There was a more significant reduction in HR at 90 minutes after bolus in the sotalol group (-24 bpm) vs amiodarone (-8 bpm), p<0.01. There was not difference in HR reduction at 24 hours. Of note some patients required intermittent atrial pacing during this time frame. See Figures below. 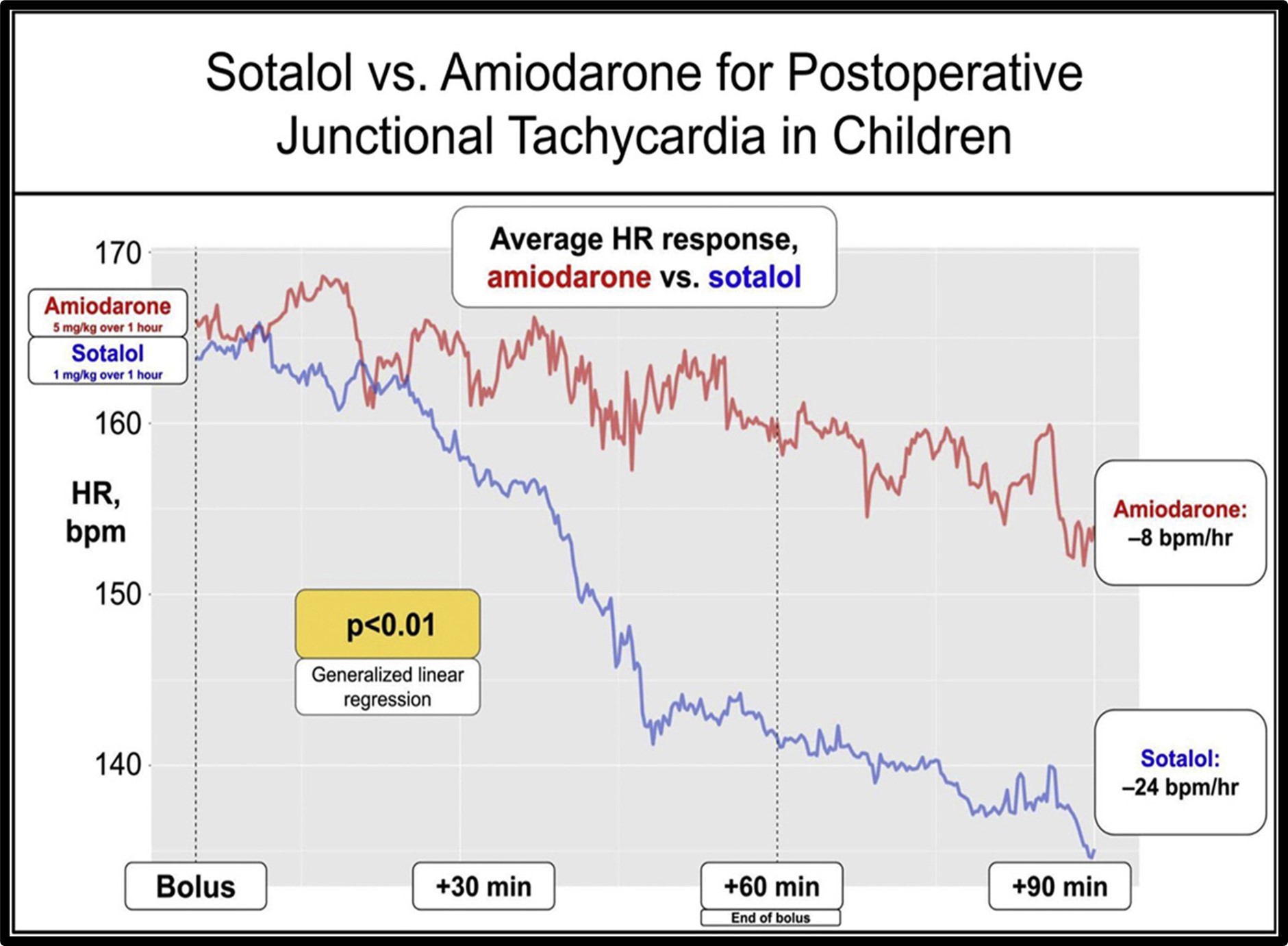 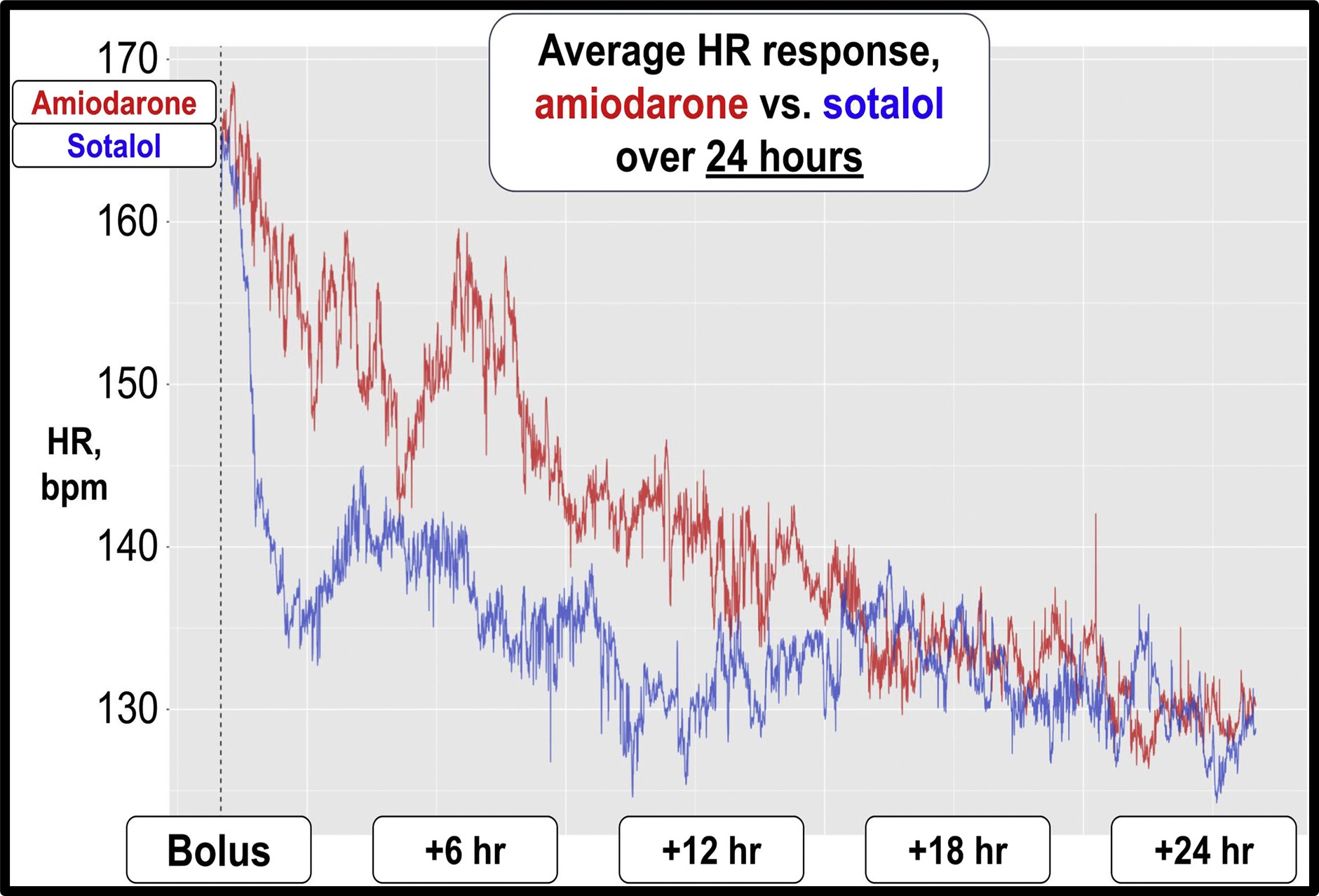 There was no difference in the pre-bolus blood pressures between amiodarone and sotalol. There was a significant decrease in systolic BP at 90 minutes after bolus in the amiodarone group (-3.6 mmHg) vs sotalol group (-0.5 mmHg), p<0.04. There was also a trend toward lower mean BP (-3.1 mmHg, p=0.06) and diastolic BP (-2.4 mmHg, p=0.07). There was no change in BP seen with sotalol. See Figure and Table below. 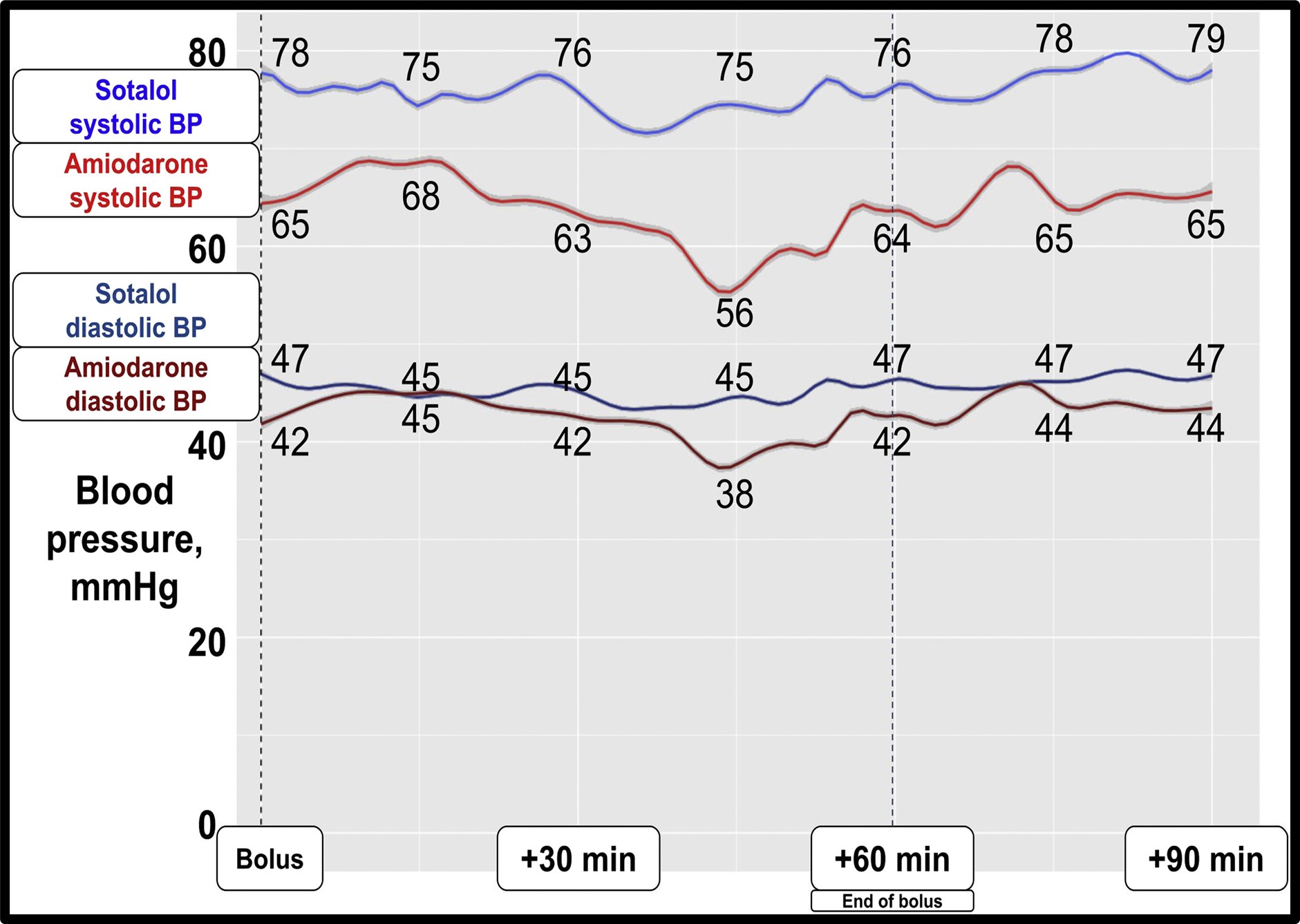 This study does have some limitations due to its retrospective design and self-limiting nature of post-op JET. First, dosing regimens for amiodarone and sotalol after the initial bolus were not standardized. The total amount of medication given in 24 hours and the dosing intervals could have impacted HR response, treatment success, treatment failure, and hemodynamic side effects. Second, cardiac function was not revaluated after treatment to assess if there was a negative effect on contractility seen. Third, the dosing of dexmedetomidine and dosing/number of inotropes used may have impacted the HR/BP response in both groups. Fourth, success may have occurred despite treatment due to the natural resolution of JET. Finally, the extent of other measures that may have been concurrently performed to manage JET such as weaning inotropes and cooling were not analyzed.

This retrospective study showed IV sotalol had a faster and more significant response in HR control in the first 90 minutes for post-operative JET without hemodynamic side effects as compared to amiodarone. As the authors mention, this study was not powered to show which treatment was more effective, but sotalol was effective in 83% consistent with the published data using other agents (amiodarone/procainamide) and regimens. As post-operative JET is a self-limited process (resolution in 24-48 hours typically), the main goal of treatment has been to improve/optimize hemodynamics in the early post-operative period via rate control and AV synchrony (i.e., atrial pacing, conversion to sinus). The faster response in HR control seen in this study would allow for achieving more optimal hemodynamics sooner. This could be especially important in the setting of depressed cardiac function and post-operative low cardiac output syndrome.

Procainamide and amiodarone, as mentioned, have been the main antiarrhythmics agents used for post-operative JET due to their intravenous formulations and longstanding pediatric data around its use and effectiveness. However, newer alternative agents are needed to improve efficacy and limit side effects. Reports of off-label use of ivabradine have shown promise but only come in enteral formulation. Sotalol provides a newer IV agent that can be used to manage post-operative arrhythmias including post-operative JET with a potentially lower side effect profile. Amiodarone as mentioned is the most widely used agent, but its use during the vulnerable post-operative period can result in hypotension, bradycardia, AV block, and cardiovascular collapse necessitating increased ionotropic support or CPR. IV Sotalol’s impact on hemodynamic side effects as this study and others have demonstrated appears to be minimal.

Overall, this study confirms that IV sotalol can be considered as an alternative for post-operative JET. Further research is required to determine IV sotalol’s efficacy compared to established treatment and to determine when sotalol should be used over amiodarone or procainamide.