Using pulse oximetry waveforms to detect coarctation of the aorta

Background: Coarctation of the aorta is a common form of critical congenital heart disease that remains challenging to diagnose prior to clinical deterioration. Despite current screening methods, infants with coarctation may present with life-threatening cardiogenic shock requiring urgent hospitalization and intervention. We sought to improve critical congenital heart disease screening by using a novel pulse oximetry waveform analysis, specifically focused on detection of coarctation of the aorta.

Methods and results: Over a 2-year period, we obtained pulse oximetry waveform data on 18 neonates with coarctation of the aorta and 18 age-matched controls hospitalized in the cardiac intensive care unit at Children’s Healthcare of Atlanta. Patients with coarctation were receiving prostaglandin E1 and had a patent ductus arteriosus. By analyzing discrete features in the waveforms, we identified statistically significant differences in the maximum rate of fall between patients with and without coarctation. This was accentuated when comparing the difference between the upper and lower extremities, with the lower extremities having a shallow slope angle when a coarctation was present (p-value 0.001). Postoperatively, there were still differences in the maximum rate of fall between the repaired coarctation patients and controls; however, these differences normalized when compared with the same individual’s upper vs. lower extremities. Coarctation patients compared to themselves (preoperatively and postoperatively), demonstrated waveform differences between upper and lower extremities that were significantly reduced after successful surgery (p-value 0.028). This screening algorithm had an accuracy of detection of 72% with 0.61 sensitivity and 0.94 specificity.

Conclusions: We were able to identify specific features in pulse oximetry waveforms that were able to accurately identify patients with coarctation and further demonstrated that these changes normalized after surgical repair. Pulse oximetry screening for congenital heart disease in neonates may thus be improved by including waveform analysis, aiming to identify coarctation of the aorta prior to critical illness. Further large-scale testing is required to validate this screening model among patients in a newborn nursery setting who are low risk for having coarctation. 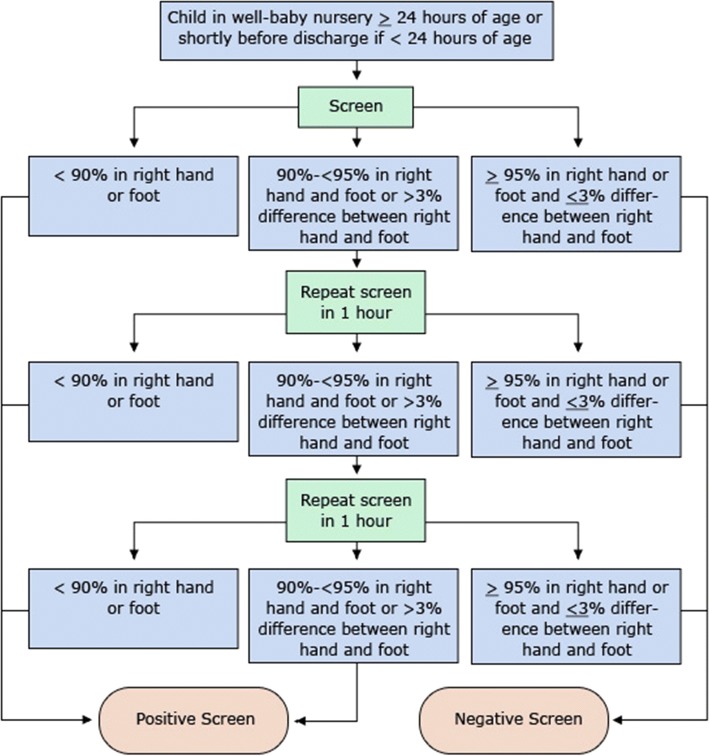 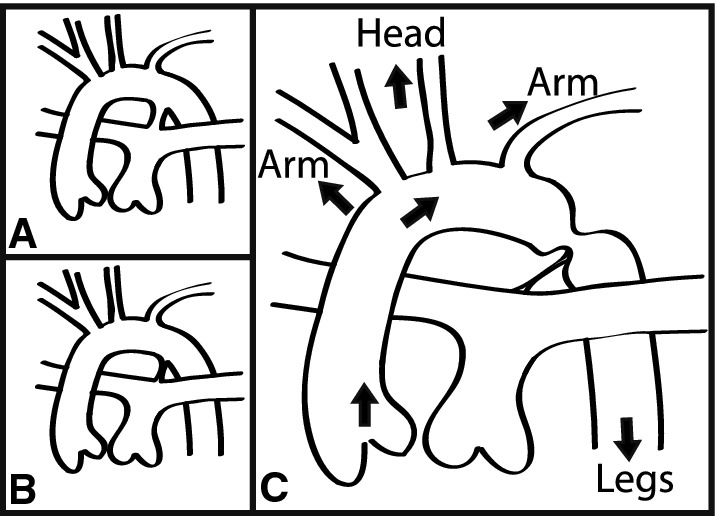 Fig. 2 Schematic of aortic arch with and without coarctation. a Shows normal fetal circulation with a patent ductus arteriosus (PDA) connecting the pulmonary artery to the aorta. b Shows normal constriction of the PDA in post-natal circulation. c Shows the most common location for aortic coarctation. Note the head, neck and upper extremity vessels branch off the aorta proximal to the most common location to have coarctation of the aorta. The arteries that perfuse the legs are located more distal from the coarctation. Thus, waveform analysis is able to identify pulse oximetry signal characteristics both proximal and distal to site of coarctation 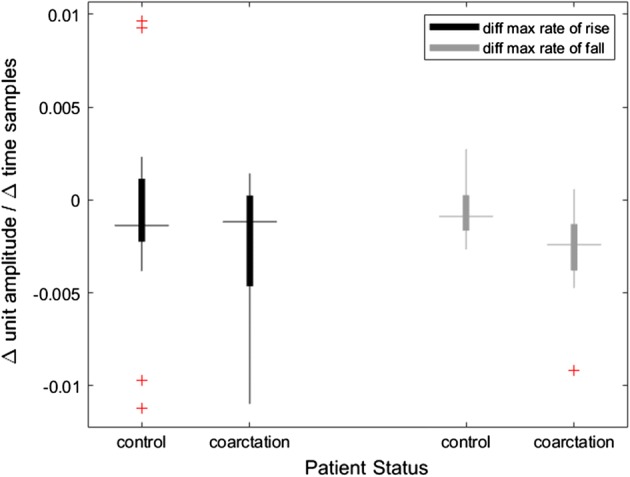 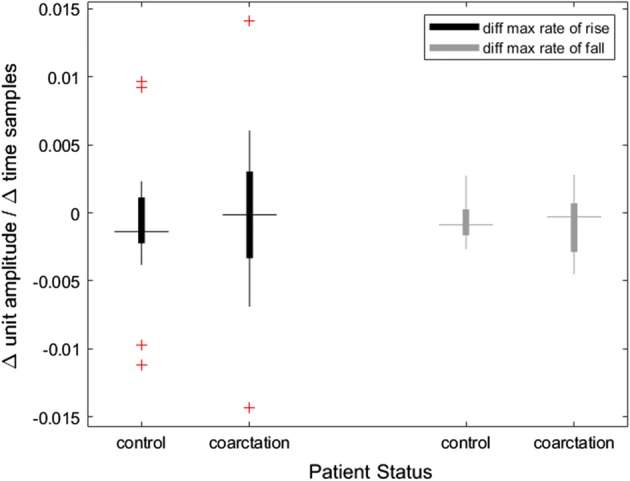 Fig. 4 Postoperative differences in maximum rates of rise and fall. The Y-axis represents a normalized slope (waveform amplitude divided by time). There was no significant difference between groups in rate of rise (p value 0.61) or fall (p value 0.93) following surgical repair of coarctation of the aorta 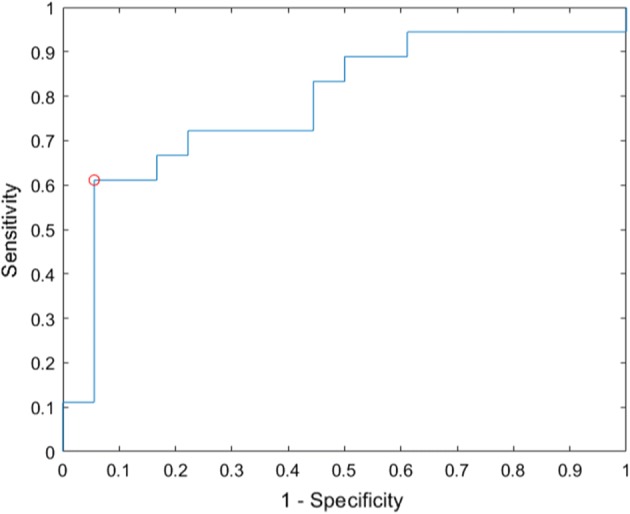 Fig. 5 Utility for the proposed pulse oximetry screening algorithm. Here we show the receiver operating characteristic curve for the linear discriminant analysis classifier used in classifying subjects as having a COA or not. The area under the curve is 0.78. The suggested operating conditions are indicated by the red circle, with a suggested operating point at a sensitivity of 0.61 and a specificity of 0.94 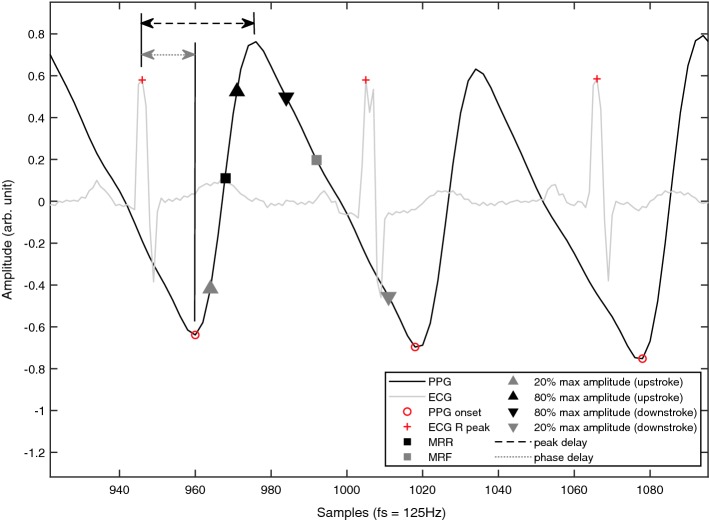 Fig. 6 Schematic of waveform analysis. Here we demonstrate a pulse oximetry waveform with superimposed electrocardiogram (ECG). Rate of rise and fall are determined by specific points for each waveform cycle. The maximum (rate of rise or fall) is calculated over a rolling 40-ms window between the points at the trough and peak. The average (rate of rise or fall) is calculated between points located at the 20th and 80th percent of the waveform amplitude. Phase delay and peak delay are the time intervals between the peak R wave of ECG to the trough or peak of the pulse oximetry waveform as indicated